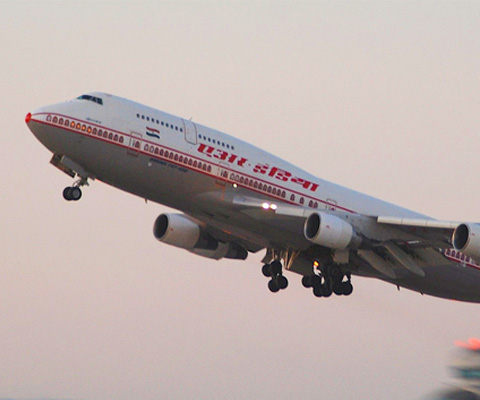 Panic usually creeps in the night before.

The suitcase—which, disturbingly, weighs almost as much as the owner—is laid in all its glory against the bed. All the flaps and pockets are unzipped. Books are spilling out of its stomach and the clothes—oh, the clothes. Jeans, tops, and shirts all vie for attention, most of them bought from seedy charity shops, and washed in the hallowed college laundry. The blacks have faded to a resigned grey and the jeans are ripped in a number of places.

For the whole night, our traveler turns and tosses on the bed, even getting out of bed at three a.m. to double-check that her passport is in the right bag. By the morning of the day of departure, she resembles a human salad more than the experienced traveler that she should be by now.

I have taken the same flight back home so many times; but the trepidation, the horror—those never leave. Every time I drag my leviathan suitcase to Heathrow’s Terminal Five, I spend the hour on the Tube preparing myself for all the tragicomedies that the Air India departure gate promises. You see, flying back home via Emirates, Qatar Airways or British Airways (not for poor students, in any case) entails little more than boarding a flight. Sure, the last-minute panic, the fumbling for your passport-ticket-boarding-pass, the mounting dread of being sat next to crying children are all there, but they do not quite have the visceral pull of anxious homecoming that Air India creates. Air India undoubtedly embodies everything that is Indian at 40,000-feet above sea level. Photograph by Aero Icarus.

Air India undoubtedly embodies everything that is Indian at 40,000-feet above sea level. It gives the ontology of being an Indian a whole new portable, airborne edge. It is in that cramped space, stuck with each other for many hours, that flyers experience their passions, loyalties, desires, and fears. The fear, of course, is nearly always that of a clogged toilet—or worse. The Air India toilets (and these are not to be passed off as ‘loos’, thank you very much) are full of strange mirth. Once I saw a sign that urged the user not to squat on the toilet seat. Another time, there was a warning about trying to use the sink to wash…

In other words, you need to confront your fears about human faeces, urine, and snot as you wait in the long post-dinner queue to use the toilet on the flight.

That, of course, is one of the more harmless of the demons that the Air India forces you to face.

The last time I was flying back, the man in the row behind me casually snapped his fingers at the flight attendant who was serving drinks. When she did not respond immediately, he proceeded to make a clicking sound with his tongue—the kind you make to call puppies—and asked for the whiskey to be brought quickly. The ending to this story is heartening—the woman turned and sweetly asked: ‘Aap kyun hum’e aise bula rahe hain? Remote par button hai, press kijiye agar madad ki zaroorat pade’. I did not hear any more clicking noises or snapping fingers for the next five hours.

Incidentally, I have never seen a woman order an alcoholic drink on an Air India flight. Of course, I have not prowled the whole flight doing gender-equality surveys, nor have I travelled with other people. What I’ve seen may not be representative at all. But it is worth asking why every time I board the flight I find myself getting slightly defensive and holding the magazine close to my chest as I curl up for the painful half-sleep.

To be honest, the paranoia starts at Heathrow itself. I have often felt tormented about the stilted defiance that slows me down as I step inside past the boarding gate for Air India. Is it horizontal hostility? That burden of the postcolonial subject which refuses to stop aggrandising the foreign and discriminating against the home and self? (I can feel Fanon’s dead fingers around my throat.) Is it paranoia against Indian men that has been injected by the tedious years of being casually groped, slut-shamed, and pushed into a corner?

But I can tell you this—last summer I sat outside T-5 for a couple of hours with a friend. Being too much of a cheapskate to actually buy cigarettes, I nicked one off him and blew out a few rings in bliss; all this until I caught three Indian men staring at me with a strange mixture of loathing and leer. As I met their eyes, their gaze slid from my cigarette-lipped face to my body—measuring, consuming, defiling. They continued to stare as I turned away and plunged into conversation with a carelessness that was not easy to achieve.

How do I know that they were Indian? They took the same flight as me, and several hours later, we found ourselves at the same queue for Indian passport-holders at the Delhi security for transfers.

It is not all so bleak. For one thing, the food is good enough to make up for the post-dinner fart-bath that pervades all the way from the toilet to the veiled and mysterious business class corridor. After six months of soggy British fare, the aloo-matar and chicken curry are enough to move the anxious traveler to tears (literally, at times). It is not all so bleak. Photograph by Parvati Ekalavya.

As the dinner announcement echoes down the plane, the young and the old, the rich and the not-so-rich, the lechy and the defiant, the families and grumpy singletons all unite in salivating anticipation. The Amitabh Bachchan-Jaya Bhaduri drama is muted. Elsewhere, Chetan Bhagat is bookmarked for a later hour and romantic blanket-love gives way to an alert, straight-backed feeding frenzy.

The square tray arrives in good time—‘Veg or Non-Veg?’ The joy of scalding, soft rice between dollops of curry and sabzi make up the little on-flight paradise. Finally, free from the horrified stares of my British friends, I can dip the paratha into the curry and lick my fingers. Around me, happy faces tuck into their mirchi-wala, ghar-jaisa salad with obvious glee. If I recall correctly, they used to have a small sachet of lime pickle until last year. I mourn its loss. Those were good times.

But the descent into the true self is unfortunately not restricted to finger-licking and paratha-dipping.

Flying Air India somehow brings out the unreasonable, the rebellious, and the ridiculous in a disconcertingly large number of its passengers. Yours truly does not deny for a second that she is one of the affected.

Small things—cutting the queue at the boarding gate, delays (okay, not such a small issue—an hour-and-a-half the time before last), posturing, farts, and loud voices—they all grate on the nerves. It is unfair to be as easily frustrated as I am—me and the old man in the front of me and the woman next to me and the man at the back. We all share exasperated half-looks of complicity. The baby crying in the next row makes me want to jump out of the plane. But I am pretty sure I would react the same way to children crying on any flight, to any destination. That one, at least, shall not be pinned upon Air India.

There is something about Air India that brings out problematic strains of our shared Indian behaviour. I used to suspect that it was really all my imagination until I found flight reviews on the Internet that also spoke about the unsmiling, clamped headmistress-face of the women in the crew. The older women, especially, neither help nor look helpful. Instead, there is a feeling that deference is owed them. While it’s true that respect is owed to everyone on the flight, whether crew or passenger, an occasional smile and (even quiet) encouragement to a five-foot-tall, nervy student trying to lift things onto the overhead cabinet would definitely be appreciated. Know what I mean?

On the other hand, backhanded help or chivalry is almost never a problem. Some men pass the struggling short woman with an impassive hurry, looking resolutely forward and occasionally jostling—because, you know, what is life without the added struggle? When there is help, however—and there has been, many times—the help comes without a condescending smirk. The heavy lifting suddenly stops being heavy and the next moment the bag is firmly tucked inside. That is all. The profusion of thanks is acknowledged with a ‘no problem’ or dismissing tch accompanied by a shaking head.

I have learnt to cherish it. The height-related jokes from six-foot-tall British men have set a very low standard.

The comedy starts to thin, though, as time passes.

Every time I fly back, the feeling of homecoming gains an acute edge—it is almost painful—as the flight nears Delhi. The wracked, bloodshot eyes consume the closing gap on the interactive screen-map in restless elation. The rush of a hundred chirping, babbling, laughing voices in Hindi, Bengali, and the sweet, sweet English bookended with ‘only’, ‘toh’ and ‘one tight slap’ (from tired mothers mainly) ferment an already delirious mind half-drowned in the expectation of the familiar odours of mud, dosas, and phenyl-soaked bathrooms.

Something about the Air India flights taking off from Heathrow retains the physical presence of home. They retain that air of the relentless, overcrowding sensations, of native absurdities. They embody that undefinable something which always threatens a lump in the throat and which I have come to associate with home in my three years of self-imposed exile.

Perhaps that is the thing about home. You can only appreciate it in its entirely frustrating, quarrelsome, and inescapable loveliness in an eggshell birdbody forty-thousand feet above the earth.

Once, in a fictive universe in another epoch, an Air India flight acted as the setting for the theatre of the absurd. Remember the fateful AI-420 flight that blew up in the first chapter of the Satanic Verses? Outside of all the historical and political reasons to do so, I have often wondered why Rushdie felt that Gibreel and Chamcha had to fly Air India. The airline could have been left nameless, no?

No, it could not have.

The Man Who Doesn’t Use Money