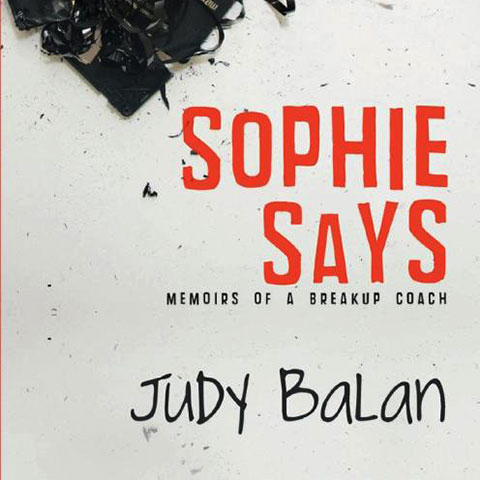 Sophie Says: Memoirs of a Breakup Coach is Judy Balan’s second novel. According to the publisher’s introduction, her first novel—Two Fates: The Story of My Divorce—was a runaway bestseller. I don’t know about bestseller, but Sophie Says does tend to run away a fair bit. And that’s not necessarily a good thing.

There isn’t as much a problem within the world of Sophie Says as there is outside it, which is what makes the book so difficult to place/judge critically. If you buy the premise and choose to believe in this formulaic characterisation of the cynical, hipster heroine and a hero out of a “Jane Austen novel”, this book is comforting in the way chick-lit can be. The story follows a cynical, 30-year-old single woman who is too cool to believe in love. It talks about how she has to make up a boyfriend to pacify her relatives in Chennai (even though she is in an on/off relationship with someone else) and looks at whether at the end of it all she falls in love, and with whom. There is no real fault with the world-building or dialogues or plot lines if you’re a more willing reader than I am. Inside 30-year-old Sophie Thilagam’s single-self world, you can enjoy the ride, even if it is nothing out of the ordinary. Once you’re out of the Matrix, so to speak, that is where the problem begins.

Everything has been done to death in countless Hollywood movies and in other writing that is marketed as being suitable for a “female readership”. Placed even within the newly-emerging (in terms of popularity) genre of Indian chick-lit in 2013, it suffers from a dated plot, stock characters, and really immature writing. The general tone of Balan’s writing, one might argue, is accessible to all readers, but it also runs the risk of coming across as juvenile—something a teenager would have written to impress. It is hard to believe that the narrator’s voice is supposed to be that of a 30-year-old woman, and some sentences really make you cringe (“I mean, how pathetic is that anyway?”). But okay, you say, why does someone at 30 have to sound like a stuffy old lady? Aren’t so many of us as immature as ever well into our 30s? Sure we are. But Sophie Thilagam suffers from one-dimensional writing, lacking any depth; and because Balan put so much effort into Sophie’s character as the novel’s fulcrum, the other characters don’t stand half a chance.

You have the two stock best friends: one who is hyper and high-maintenance, and the other who is too cool for school, already so over the world that her entire existence becomes an act of rebellion, y’know? Right, so that’s the hyper-female and the hypo-female done with. Sophie’s B.F.F. Joe volunteers his mysterious Alpha-male friend, the “yummy”, stubble-sporting, devil-may-care, edible-jawline-having Ryan to be Sophie’s fake boyfriend for the elaborate ruse she has concocted in the spur of the moment to appease her mother and her banshee friends. Ryan volunteers to do everything a boyfriend does and agrees to do it for 12 weeks—which is how long Sophie needs to put up the act. He drives Sophie up the wall because he’s the first guy who hasn’t fallen for her and in fact thinks she’s full of shit. There is a lot of pouting and pontification and it goes on to be every other romance story that was ever told. I’m guessing that if Joe had just set them up earlier in their lives, seeing as he knows how awesome both Sophie and Ryan apparently are, it would have been a much shorter novel.

I will, however, make an exception for the way Balan chooses to end the story. The epilogue is where any semblance of an authorial voice tends to shine through, and from what one can read, it’s a promising one. You only wish it didn’t take her an infuriating 235 pages to get there.

A major issue I had with Sophie Says is the grating way in which arguments against being “just like other women” seem to be portrayed. The problem is, you can’t see well enough where Sophie Thilagam’s voice ends and Balan’s starts. Somewhere in the middle of the novel, they sound like one. Sophie rails against how fashionable it has become for young girls to call themselves “feminist” (which she equates with male-hating) nowadays; she rolls her eyes at how almost every other woman but her talks endlessly; she complains about how endlessly dramatic, psychotic, jealous, and undignified women are in relationships. I fail to understand why, in trying to establish Sophie’s uniqueness and individuality, Balan finds it necessary to use painfully offensive stereotypes of women and then reinforce each one of them throughout the book. In trying to set up her protagonist as the “first woman in reality and fiction” to do things the way she does, the author pushes Sophie to an extreme that ends up being as damaging as if a raging misogynist had written the novel.

My exasperation stems from the fact that there is so much potential to tackle subjects about single 30-year-old women in India, living in relatively more traditional cities like Chennai, who are—here’s the clincher—happy being single. There is so much more that Balan could have done, and the book ends up being an echo of what might have been, in an alternate universe, an incisive, fun novel.

Chick-lit can be done well; it can be done poignantly without resorting to stock themes and characters. It can offer deep insights into what it is to be a woman, along with being “fun” and “indulgent”. Unfortunately, Sophie Says does none of those things. It will find a place in bookshelves—the novel is not entirely unredeemable. But at most it will be the book that you pick up when you know exactly what you want: something to read while you kill time, without taxing your brain too much.