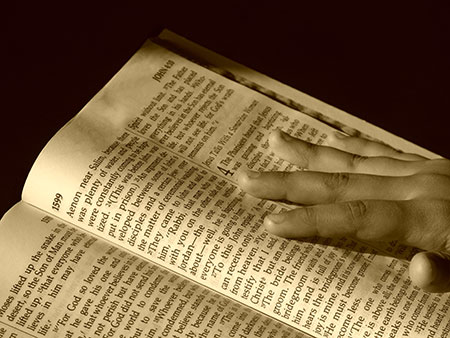 Years ago, as a child in the pre-Y2K world, I remember being subjected to a whole lot of speculation as we inched closer to the end of the millennium. The world will end! Classrooms will be electronic! Books will be replaced by technology! All computers will be infected by viruses!

The stuff we were bombarded with in the media—wild speculation about how different the year 2000 would be—was scary stuff for children. But nothing scared me more than this idea that no one would read books anymore—not even the world ending. When you’re a kid holding a book in your hands, flipping its pages with chocolate-smeared fingers, you don’t believe that something like that could ever be true. What made these claims so funny, even back then, was how out there the idea of paper-books not existing one day seemed. Yet here we are today, contemplating the death of the publishing industry. Here we are today, contemplating the death of the publishing industry.

Of course, all apocalyptic claims turned out to be as comical as they were unfounded, but I don’t think the publishing industry healed from the hurt caused by all that hefty speculation. The current crisis looming over the publishing world, of course, has culminated only in the last few years (and books on paper still sell rather well). Most of us have become active participants in this global, social culture. There are so many more of us writing, becoming authors, publishing our works online, and interacting in this huge chain of immediate consumption and participation as readers. But has our perception of worth and value regarding the same evolved as exponentially?

Despite the act of publishing now becoming a democratic and postmodernist process (personal blogs, web sites, etc.), there is still a strong qualitative value attached to books that bring in the ‘big money’ for authors. “Oh, so you’re not a real author,” people will claim, if you publish your work for free. The economic and cultural value we attribute to the most traditional form of the book is becoming somewhat of a fetish. As the prospect of touching books in paper form in the future looks increasingly daunting, the currency of paper-books already in circulation suddenly becomes a rarity; the desire to smell and touch the spines of a hardcover become a vulgar fetish (“do you not know how many trees died to make one page of your book?”)

In a world where everyone possesses the agency to self-publish (‘everyone’ here refers, of course, to people with an Internet connection), how do we deal with questions of quality? The decision to choose which out of a few thousand authors was worth publishing was never left to readers; our choice has always been to pick which published author to read. The implicit assumption has always been that all published authors have cleared a uniform quality test; that they are deemed to have something of value to offer to have been published. But left to ourselves, how do we even begin to map the millions of literary pieces that flood the Internet? A good quarter of that volume will have been plagiarised or used without permission, passed off as someone’s original work; and more often than not, there will be no way of knowing.

In a world where everyone with an Internet connection possesses the agency to self-publish, how do we deal with questions of quality?

Nothing, of course, could be as horrible as having to pay for publishing your book yourself, as countless literary farces have claimed (Tom Sharpe, I’m looking at you). The idea that a talent has to expend his own money to sell his work becomes akin to a bribe in our heads—if he has to pay others to read his book, he mustn’t be that great. Publishing on blogging sites still salvages itself from that ignominy, because for most users, there isn’t such a large income from advertisements and web traffic to pull us through. For most of us, publishing online is free. It brings in free reactions as well—no one has bought your book or story; they did not have to make a call on whether your text was worth their investment of time and money. It’s a zero-sum field.

The difference between old-school, capitalist publishing and this new-age publishing is nowhere more apparent than in the field of e-papers and online journals and magazines. Despite making that move from paper to pixels, most literary enterprises strictly declare that material published on personal blogs is also considered as published, hence void for submission to their magazine, for ‘legitimate’ printing. Of course, one can also see it as exactly the opposite, that by doing so, magazines give equal weightage to personal blogs, considering the act to be akin to publishing it in any other journal. However, the implicit judgement, I feel, still remains. If you thought your piece could have been published for free, don’t bother coming to us.

Book Review: The Sense of an Ending

Our worth still comes from others. Critics’s and writers’s claims that reading is now in fact becoming a solitary, peaceful exercise (sought out desperately, because it is so rare) isn’t entirely off the mark, but I find that it ignores the fact that we now read as an active cultural exercise; we read and share in real time. I finish the pages of a book and update my review on Goodreads or my personal blog, and it is immediately an act of cultural participation. Here is my contribution. I am an active part of the reading world today. Before this, there was reading in bed, reading under beds, reading in book clubs, reading against your will in school, but each with a slightly and relatively slower speed of cultural participation. “Have you read so-and-so?” is an obsolete question in online bookworm circles. You can search someone’s blog for the review, or look through their read/currently reading/to-read lists. The first lines to potentially great discussions or friendships in real life are now rendered obsolete on the Internet.

Because paper is now seen as vulgar and unnecessary, each decision to print anything requires extensive qualitative and cultural analysis before the act of printing itself.

Reading is social, yes. Printing and publishing is dying. Most people have a printer at home, and what an awe-inspiring, science-fiction-esque fantasy that must have seemed to men in the 15th century. The agency to print is our prerogative. Because paper is now seen as such a vulgar, unnecessary luxury, each decision to print anything (your train ticket, that potential best-seller, a start-up magazine, etc.) requires extensive qualitative and cultural analysis before the act of printing itself. What we used to review after something was printed/published, we now increasingly have to decide on as a precursor to printing something.

It’s a free-for-all in the online publishing world—almost everyone has a chance to become an author. But the anxiety that plagues writers now extends to readers as well. Where should I publish, can I make some money from this, etc. are questions in the minds of authors that soon give rise to others (for readers) such as: should I buy a book that others (the publishing house, for one) have already invested in for me, or risk the great textual outback, that wild and vast expanse of wordy jungle, the Internet, where everyone is up for becoming a literary lion?