I went for my first political rally this year in Noida, and the first thing that struck me was that most people present didn’t know what Rahul Gandhi really looked like.

Don’t get me wrong, they had all seen him. Being one of the Gandhis in this country ensures that you get enough screen time during most newshours to make your face instantly recognisable. But people didn’t know what he looked like, and perhaps more importantly, they didn’t care.

They didn’t care about his designer stubble (which pundits believe is to promote a more ‘of the people’ image), nor did they care about what he had to say. What they essentially cared about was the helicopter he came in and then secondarily, the television cameras that were perched tensely on the makeshift platform that had been constructed for the media. A village elder in Bhatta-Parsaul wiping the sweat off Rahul Gandhi’s brow. The majority of the votes from the village went to B.S.P.

Before people start assuming that I am a Rahul Gandhi supporter or alternatively an anti-Gandhi ideologist who wants to use this as a platform to share his political opinions, let me assure my understandably skeptical reader that I have no such leanings. I have honestly never cared about politicians, being perhaps too narrow-minded and skeptical to believe in what they say. I was at this rally, which was incidentally taking place in the same district as Bhatta (land acquisition, rape, Mayawati bashing, etc.), for work purposes.

Armed with a notebook and a camera, which by now was feeling quite inadequate in the presence of all the judgemental S.L.R.s, I was amazed (but not entirely surprised) at the political mechanisms of these rallies. It wasn’t about what the people wanted, or even making promises that made sense. It was all a show and these people were here because this rally provided better, more tangible entertainment than the T.V. at home.

And this was the same when it came to the young Yadav scion (I use the adjective ‘young’ very liberally here): it was still a show. The helicopter, the garlands, the jokes—all of it—one long carnival and everyone, including me, loved it. Sure, there was the usual splattering of rhetorical promises: “Free electricity for everyone, more jobs, computers in English, Hindi, and even Urdu, safety for women and children, clean drinking water and water for irrigation, better roads,” roared the young politicos and the crowd roared with them.

I don’t think anyone believed these leaders, who had come amidst them to beg for votes. But I do think they enjoyed the attention and many that I spoke to were quite certain that the same promises were going to be made again. As one bearded old gentleman, who had traversed a few hundred kilometres from Loni (in Ghaziabad) to Dadri (roughly in Greater Noida) to see Rahul put it, “He’s probably not going to be able to keep his promises. But what else do voters like me have to look forward to? He promises my sons jobs, and I hope he will be able to keep his promises.”

The voter is different from other human beings. He is no longer an individual, instead he is categorised, as are his needs, his lineage, his language, and so on, and somewhere through this categorisation and political analysis, people have realised that these rallies, these extravagant, rehearsed carnivals, are essential in obtaining votes.

Now, I don’t know whether this modus operandi works, or whether a different approach would yield more dividends. My own political acumen is still too shaky to answer such profound questions, but there can be no denying the sheer entertainment value of these rallies. Take for instance the elephant jokes, a new form of political humour that evolved over the course of the last two months in Uttar Pradesh, shining through the otherwise repetitive speeches regarding development and corruption. Elephant jokes have emerged as the new form of political satire, used freely by the opposition parties, in their scathing criticism of Mayawati and her governmental policies, especially by Akhilesh and Rahul. While previous elections saw political leaders making stale promises that they intended to keep, this year we saw an incredible increase in political satire with opposition leaders missing no occasion to take a dig at Mayawati’s extravagant ways and the B.S.P. symbol, the elephant.

Addressing a rally in Dankaur in late February, Akhilesh Yadav, the young leader who has promised to teach his party workers about computers said, “If you think that the elephants have taken over Noida, you must come to Lucknow. There are elephants everywhere and they have slowly taken over the state and stolen your land,” and expectantly the people laughed and cheered him on. He was quick to point out that the elephant was no longer wild in Uttar Pradesh and had become too overweight and had finally fallen down with a great big boom. Rahul wasn’t too far behind with his classification of the elephant in Lucknow as perhaps a new species. “The elephant in Lucknow is an atypical one. While other elephants eat grass, this one eats the money of the poor,” he said in Greater Noida.

The elections are over now, and I am not sure what made the people of U.P. vote the way they did, or why they did so. I don’t know whether it was caste, or whether it was the simple fact that the elephant jokes were too good to resist. But I have learnt one important thing after losing my election cherry: elections, especially the period of frantic campaigning before the elections, are just a show and as the great philosopher Mr. Mercury once crooned, the show must go on. 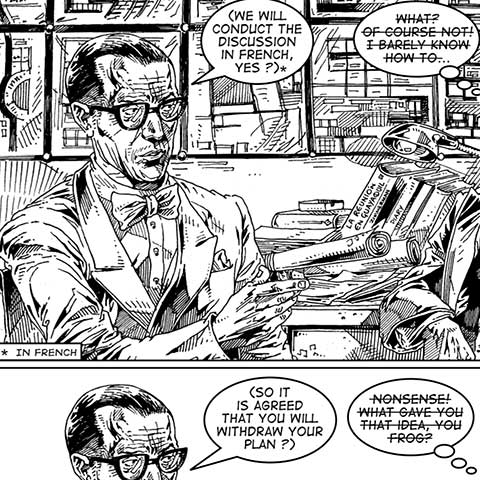