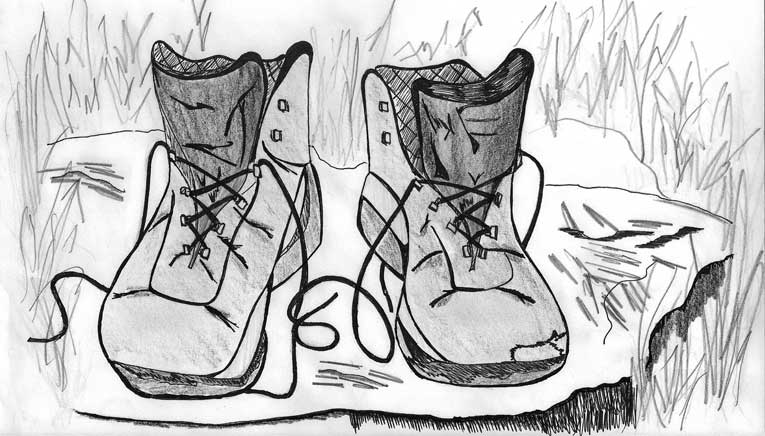 Since we were in pretty good shape from all the uphill walking we did every day, we decided we were ready for the short trek up the mountains to Nachiketa Lake. G was our chauffeur/guide for the day; he owned an electrical goods store in the village below and had driven Mata around several times in his red hatchback. Raghav, the engineer/philosopher joined us saying that a little exercise would be good for him and the trek sounded like just the thing.

It isn’t a demanding trek. Our trail wound moderately steeply and some bits of it seemed precariously close to the edge of a drop. But for the most part it was a scenic climb past colourful shrubbery, dwarfed by conifers that began fathoms below and shot a mile high. G and Raghav sometimes took little detours that hid them for a while before they emerged some metres away, not always ahead of us. M walked with Mata, who in a non-ashram setting became a lot more gregarious. They spoke at length on Uttarakhand politics. I kept pace with no one, happy to be alone and quiet. On the last stretch we all came together again, so we reached the meadow at the same time. There were wildflowers everywhere. Large beds of soft yellow, dusty pink, kingfisher blues and purples. And the whites, my favorites, with yellow centers on stalks of the palest green. To hell and back (almost). Illustration by ANJA.

G wasn’t eating anything that day so he pottered about with some juice in his hand while we unpacked our picnic. M had made us some delicately spiced potato wraps—careful to avoid the forbidden garlic. Raghav had brought rolls of cookies and some bottles of juice. Mata had decided to go with bananas and oranges. It was a perfect picnic lunch, rounded off by slabs of sun-softened dark chocolate. Knowing that it would be only too easy to lie there in the grass and doze off, we packed up our bags and got up to examine the door to the netherworld.

A mysterious gash in the uneven ground—I cannot call it a cave or tunnel—twisted away into the bowels of the earth. This is said to be the remnants of the gateway to Naraka (hell) at which Nachiketa, a sage’s son, had waited three days and nights to meet Yama, Lord of Death and Justice.

We’d heard of this passage and I wanted to see how far in I could go. As it turned out, I couldn’t go very far at all. After some spine-twisting turns the opening narrowed considerably and no amount of yogic flexibility could get me into the uninviting space that stared gloomily back at me. We all gave it a shot, but Yama wasn’t seeing any of us that day, it seemed. So we moved on towards the lake.

I’ve seen some peaceful lakes in other places, so that was not what was striking about this one. The others were as silent, tranquil, and remote even. I think it was just a feeling in the air, like something important was about to happen, or had just happened and I had missed it. Not in a Loch Ness sort of way; more insidious.

The lake was leaf-strewn, dark and still, surrounded by tall trees that blocked all but the most stubborn rays of light. These fought past the branches to cast diffused green phosphorescence over the water. Large black fish swam about unafraid in the shallows, having rarely seen anyone they should be afraid of. The lake was largely unfrequented and the only neighbour the fish knew was the gnarled ascetic in his cave some metres away. We weren’t being very loud but he must have sensed someone was around, for he stuck his head out enquiringly and beamed toothlessly at us.

He had many stories to tell, of the legend and the lake and his life by it. We sat down to listen for a while, though we knew we’d need Raghav or G to translate for us later. Then while Raghav stayed to chat with him, the rest of us wandered off in different directions. I found a dry spot quite close to the water and sat watching the fish until G announced that it was time to go.

It was a clear, blustery day. Perfect hiking conditions. Ideal, for a tossed away beedi or cigarette butt to smoulder unextinguished on dry leaves. What must have begun as golden pinpricks had turned into monstrous orange tongues flying through the vegetation and cutting down giant trees like they were brittle winter twigs. G asked us to hurry. Soon our way would be blocked completely leaving us stranded for a good while. Stumbling over stones in our haste, we made it to a bend at which G stopped abruptly. Bumping noses into backs, we craned to see what he was looking at. We heard it first. We had reached the fire; or rather the fire had reached us. One side of our path was the 90-degree stone face of the mountain. The other was a fall of at least a hundred feet into the forest below. This forest was on fire and the wind was beating it upwards towards us. “If we run, we can make it,” G shouted over the roar. “Step firmly in the centre of the track and don’t look down at the fire.”

There were five of us and M and I were at the end of the queue we formed at the beginning of the track. G ran over first. It probably took him less than a minute but then we weren’t breathing. We watched him make it to a stony ridge on the other side. Mata and Raghav followed and the hot air and ash in their faces left them teary and spluttering. We waited for them to reach the end; we didn’t want the track giving way under the stress of the heat, the falling branches and our combined weight all at once. I went first and was immediately swallowed up in a thick cloud of ash and sparks. A heavy branch spectacularly ablaze fell from a height onto the treetops in the ravine. I shut my eyes for a second and promptly missed a step. The ground beneath my right foot crumbled and gave way. Through streaming eyes I could see the others in front of me mouthing words I could not hear and holding out their hands. I didn’t look back. I looked down. The wind was whipping debris into the air, howling. Where the edge of the path had been was now smoky space. Getting as close to the stone wall face on the left as possible, I ran. From the thudding on the ground I knew that M was right behind me. Three pairs of hands pulled us onto the ridge.

We didn’t say much to each other for the rest of the way down. When we were on level ground again and walking towards the car, M gave my hand a squeeze. We’d not gotten past the gates but had a fair idea what hell could easily have been.