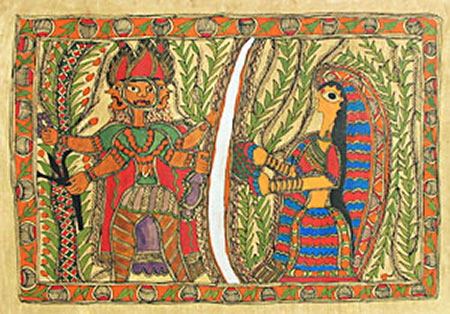 “You know your Lakshman rekha. Don’t cross it.”

Er, mom. Where exactly are the boundaries again? Spell it out, will you?

Any Indian (Hindu) woman growing up will attest to being subjected to this refrain. The meaning of the Lakshmanrekha of course, depended on how ‘liberal’ one’s parents were. It could mean anything from not talking to a guy, to P.D.A.s, to indulging in sexual activities, to taking drugs, to… anything that symbolised that a nice Indian girl was going out of control. For some reason, the rekha, or line, is mostly seen as a reference to interaction with the opposite sex, and only applies to women. None of my guy friends have even heard of this rekha business.

Yesterday at lunch, Ma was grandly telling me, “Sure, date. Just don’t cross the rekha.” A Madhubani painting of Ravana kidnapping Sita as she crosses the Lakshman rekha.

“What is the rekha? What is it that you don’t want me to do?”

See what I mean? The actual boundaries are never spelt out. I mean, honestly, where does the damn thing begin and end? The ambiguity of the rekha is rather baffling.

I think the trouble started when a bunch of men decided to come up with the Ramayana. (Yes, I believe it’s a myth. They call it Hindu mythology for a reason.) The Ramayana spelt out ambiguous rules and regulations to overlook the Indian Hindu women’s behaviour towards the opposite sex.

[Insert Indian accent] Man 1: We must do something to protect our women’s chastity.
Man 2: You are absolutely right!
Man 3: Our women must be under our control!

Think about it. Lakshman, Sita’s brother-in-law, draws this protective rekha (a boundary, if you will) around her to protect her from the lustful nazar (or eyes) of unknown men (here, Ravana). Not only is it a warning tale to young women about the consequences of defying the rekha (I mean, poor chick gets kidnapped, then disowned despite proving her chastity through fire acrobatics—twice—and that too in a pregnant state!), but the rekha itself symbolises the many boundaries imposed upon female sexuality while growing up.

In my case, the “rekha” or, the allusion to the sacred line drawn by Lakshman to protect Sita, changed meaning as I grew older. In fact, even as recently as 2007, I was not allowed to stay out all night. Even though it was on New Year’s Eve, I remember cabbing it back from Niagara Falls all alone on the last night of the year back to my suburban home just because staying out all night would have meant crossing the rekha. And yet, I have spent a crazy bachelorette party at the same Falls in 2010 doing things that would have certainly fallen outside the sacred line. Irony ahoy!

I think parents forget that just like boys, girls will be girls. Seriously, now. Do you think we do not get up to mischief? That we do not cross the goddamn rekha that you have not specified for us? You are wrong. We do. All the time. We are just too damn clever about hiding it.

But why should we go undercover? Why pretend? Why is it such a taboo to flaunt our sexuality? Why can’t I kiss that boy openly if I like him enough to? Do I become a slut? A whore? Such tired comparisons. Why can’t I be compared to a classy courtesan for a change? Or, one of those talented geishas? Hats off to those women for owning their sexualities.

So, when my dad said, “We should not have to spell out your boundaries for you. You should know them by now,” I said, “If I can face myself in the mirror unflinchingly and without shame, I have no one else to answer to.”

I draw my own rekha. Lakshman can keep his.