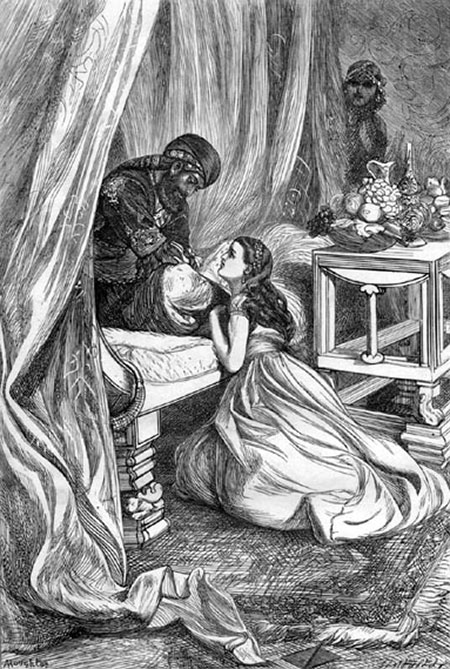 Once upon a time, in a book rife with lies, Princess Scheherazade spent one thousand and one nights in bed with Prince Shahriyar… speaking.

Poor child. Not a single glass of cool sherbet was offered to soothe that lovely throat that may have gone hoarse as she spoke to save her life.

Princess Scheherazade. Of noble birth and noble poise. She gladly gave herself up to satisfy the prince’s twisted sense of humour where he took virgin brides to bed one night, and had them beheaded the next. His reason was fuelled by a fear of infidelity on their part. Notice how he sacrificed virgin brides after he had deflowered them. Ironic. No one ever questioned the prince’s virginity. Or sanity, for that matter. (I wonder if he was afraid that he wouldn’t get his seventy-two virgins after death, and was trying to make up an equivalent in human numbers.) Did her heart pulsate wildly as she made a careful note to appeal to the prince’s mental libido, while keeping his physical libido at bay?

But Scheherazade? Did her heart pulsate wildly as she made a careful note to appeal to the prince’s mental libido, while keeping his physical libido at bay? Did the imagined swish of a sword at the guillotine haunt her dreams, as she struggled to maintain the veneer of an artful storyteller, with apt tincture pauses at the exact moments in order to create an illusion of drama and mystery? Or, did she just inwardly maintain a running record of Lady Gaga’s ‘Poker Face’ as a talisman against fear?

Was it perhaps a girlish infatuation that led her to his bedroom of doom? Did she secretly hold a special place for the prince, to willingly walk into a death trap? Or, were her motives more selfish and lay in her desire to be immortalised in history? Perhaps, she lost herself in the somnolence of a utopic fantasy where her tormentor would fall hopelessly in love with her storytelling skills (and… other things).

I wonder if even once in those one thousand and one nights, she regretted her decision. Did she ever daydream of taking the prince by his beard and shaking his face, out of her frustration and rage? Or, was she one of a perverse mentality whose kink lay in a masochistic self-torture where she fed off from the dread evident in the flutter of her heart? Did she ever in those long, long nights mistake that flutter for… love?

Love, indeed. The bane of life. Look at Sita. She insisted that Ram come save her from Ravan, and what did she get? Two counts of fire acrobatics to prove her chastity.

Look at Europa. Ovid’s Metamorphoses etched her “rape” by Jupiter for centuries to come. But if Jupiter’s fulfillment lay in plain ravishing, then why make Europa his queen? Why choose her to rule Crete, with a special place right next to him? What if “love” was all they really had?

But Scheherazade and love? Was she in love with a murderer who had a trail of massacred damsels on his hands?

Myths and historical myths are often interpreted (and misinterpreted) at will. I could give you a lecture on the Babri Masjid-Ramjanmabhoomi controversy manipulated by political parties that led to unnecessary bloody communal riots. But let’s stick to simple things.

If just like Ovid’s possible misinterpretation of a possible love story, there had been no pointy sword hanging over Scheherazade’s neck? Maybe her stories were just sweet nothings between two lovers after a very “sexy time” in bed (a commonplace substitute for the modern-day post-coital cigarette, perhaps?). Then, the massacres could have been a lie. A cover-up made up over time to spice up the origin of the one thousand and one stories. Spice sells. And, love stories are trite and common, anyway.

But let’s ask an expert on relationships. Freud, darling? What do you think?

He takes a long drag of his pipe, strokes his beard, and says, “Love, shove, nothing! What really happened was: once upon a time, a woman fell in love with an infantile man, and told him bed time stories to fulfill an unfulfilled Oedipal complex. By being able to do so, his love for her was unshakeable. And, tell me this, how could he let go of that mother figure, once he had her?”

Maybe, the guy has a point.

So Scheherazade, forgive me. But your tales are all you have. The rest will be reworked again and again in an infinite loop, till we have exhausted the possibilities of your life. Truth comes in many versions, and maybe some day, we will hit upon the right one.