“I watched in fascination as a gigantic Black Widow spider, her body streaked with green and yellow, crept down the veranda wall in the direction of her sleeping husband.”

Susanna’s beauty and wealth mean that she has no problems finding a husband, but somehow they don’t last very long. A motherless child brought up by her reclusive father (and the Freudian warning bells immediately go off), she becomes the sole heir to his estate and rumoured ‘treasure’. She is of Dutch and East Indian descent; everything about her exudes mystery and she holds a destructive fascination for the locals and the men who fall for her. A select few are let into her estate, and no one besides her staff and her (current) husband is allowed entry into the house itself. Even within the house, there are sections that are barred for her trusted staff and her beloved husbands, a fact the latter don’t appreciate. Her staff consists of an eccentric bunch: A jockey referred to as just ‘Goonga’ because he is deaf and mute, her personal help Maggi who is middle-aged and grumpy but “very efficient”, and Shah Rukh the gardener who will show the narrator, Arun, around the estate.

Arun is ten years younger than Susanna, and her neighbour throughout the story. He admits to himself that the difference in age is a pivotal reason he wasn’t one of the seven, however their relationship continues to be fraught by jealousy—from both sides.

The novella fails to create the atmosphere that the genre (mystery/murder/horror) demands. The mystery is dispelled early on in each section of the story; there in no big reveal, just details remaining to be unveiled. However, the end is unexpected. Characteristic of Bond’s work, the language is simple, the plot understandable, and the psychological narration sparse. Susanna is intriguing in her complex generosity and cruelty, the beguiling nature of her intelligence, her reverence of her father, and her search for a man who will replace him.

Penguin has brought out an edition that includes the original short story, the novella that it was expanded into, and the screenplay of Saat Khoon Maaf that was based on the novella. Out of the three, the screenplay is undoubtedly the worst. The characters speak in hyperbole, the objectiveness of the narrator Arun is reduced to heroine worship, stories unseen in the novella emerge and overwhelm the plot in places and it’s hard to understand how the same Vishal Bhardwaj of the Kaminey vision could have compiled this script.

The short story is perhaps the most charming of the three, and is closer to Ruskin Bond’s customary style than the novella. It has the lingering flavour of a traditional ghost story to it. The mystery remains intact and the suspense is held captive under a gravestone—or seven. The novella, short story, and screenplay, all have different endings and I thought the end to the short story was the least dramatic. I would recommend reading the short story to Ruskin Bond fans.

Urvashi is a writer and a feminist. She trips over her own feet a lot.
Filed Under: books, films, matthew robbins, Reviews, ruskin bond, saat khoon maaf, vishal bhardwaj
Tweet 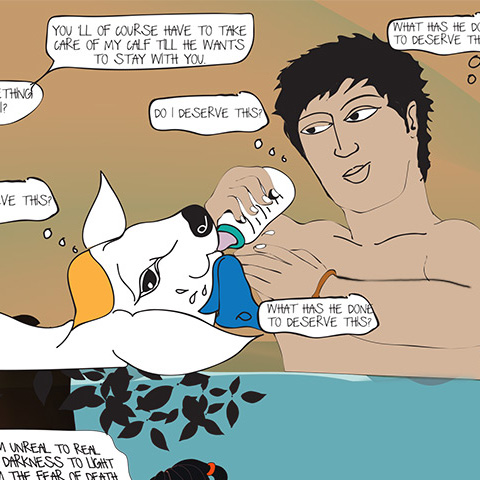