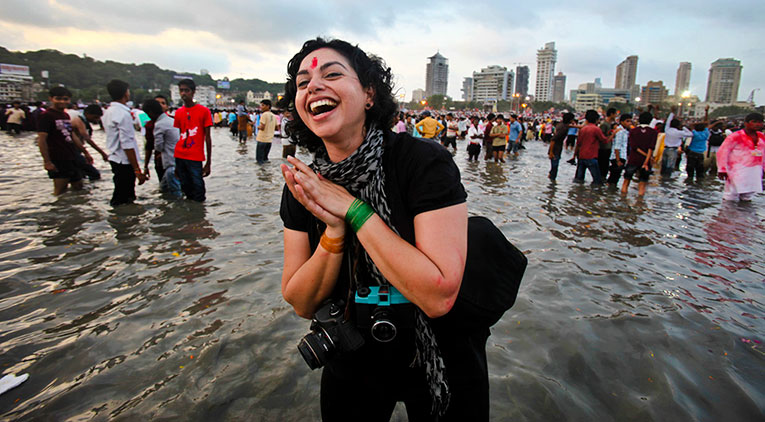 Kainaz Amaria likes to describe herself as a visual journalist. Dream Mumbai, her latest project, is something that was born out of a survival instinct. A visual diary replete with thin slices of the city’s rich narrative, it is an honest and absorbing look at everyday life in Mumbai. We caught up with Kainaz for a chat about Dream Mumbai and her upcoming documentary about the city’s Parsi community. Read on for excerpts— Getting her feet wet. Photograph by Nick Oza.

You have a degree in international relations and political science. How did the transition to full-time photography happen?

Yeah, when I was in undergrad at Boston University, I studied international relations and political science. I really liked the subject in theory, I thought it was interesting. I did a lot of internships, and in practice, I wasn’t terribly happy with the different types of outlets that you can get into in politics. I interned for Senator Kennedy and at the House of Commons in London, and I just didn’t like it very much in practice. After undergrad, I moved to London, just to figure out what I wanted to do. I wasn’t ready to go straight into graduate school. My parents wanted me to go into law school or med school or management school, but it just didn’t feel right. I knew that there was something else, but I didn’t know what it was.

I worked in London and lived in the city and started hanging out with creative people and photographers and, yeah, that’s kind of where I found photojournalism. A friend of mine put a book in my hands—it was James Nachtwey’s Inferno. Pretty epic book of all the modern conflicts, and… I think I sat in the corner for three hours, looking at every image. I said to myself that if I can have a career that would be, you know, a modicum of what this man has done, I would feel satisfied. That is the moment when I decided to devote my life to this. And it’s a lifestyle. It’s not really a profession per se. What newspapers did you work for?

My first internship was at the Palo Alto Weekly, a really small newspaper in the Bay Area, and then the San Mateo Daily News—I don’t even know if it’s around anymore. I would do, like, eight assignments a day. I’d drive 250 miles around the Bay Area, and I learned how to hustle. I wasn’t making great images, but I was learning the hustle, you know? Learning the language, learning how to tell stories with an image. Then I decided to step it up, and I went to graduate school. I figured that I needed two years to really learn this discipline properly. After that, I did an internship at the St. Petersburg Times for a year, and then I got the Fulbright Scholarship and moved here.

How did the Scholarship come about?

I got the Fulbright to do a documentary on the Parsi community. It’s a work in progress. It’s a difficult project to work on because it’s so close to home. The reason why I wanted to do it was because I had worked so long in documenting other cultures that I wanted to look at my own culture and learn more about it. But it’s not easy to turn the camera on your own culture. You feel a certain responsibility with regards to how you present the subject matter. There’s a fine line between, you know ‘as a journalist, these are my responsibilities’, and ‘as a Parsi, these are my responsibilites’. It’s not just a watered down project. Parsis always complain that people always say negative things about the community, but you also want to be honest. And honestly, right now, it’s a difficult time for the community.

In terms of, well, just sheer numbers. In terms of this feeling that the community is fading so fast. People are really trying to hold on to a lot of traditions pretty adamantly. There’s not a lot of moderation in opinion. It’s like you’re either here or you’re there. It doesn’t seem like there is a lot of compromise or a healthy dialogue between people that feel one way and people that feel another way. So when you come in and do a piece on the community, people complain that you talk about the negative stuff. But you have to be honest as well, otherwise it’s not going to have much impact. Plus, I’m different because I grew up in the States. People in the community are a little skeptical about where I’m from and what my opinions are. I need a little more time to convince people that my intentions are good and honest.

“I think that we can sometimes get so overwhelmed by that larger narrative that when you capture the small moments, it brings a smile to some people’s faces.”

Is there a particular aspect of the community that you’re trying to focus on?

I’m looking at the priest class and the priest lifestyle, but that may change.

Coming to your Dream Mumbai exhibit: Was this your first showing in the city?

Yeah, absolutely. The response has been very positive, especially the response from locals, which has been very humbling. After all, it’s their city. They see it every day. A lot of people have said that they really like the aspect of seeing beauty in everyday things. Like there’s this image of birds on a lamppost in Bandra, and that image, for a lot of people, speaks to them—maybe because of the simplicity of what it is. Each picture tells a small story from the larger narrative of Bombay. I think that we can sometimes get so overwhelmed by that larger narrative that when you capture the small moments, it brings a smile to some people’s faces. You refer to it as a project born out of a survival instinct.

Total survival instinct. Photography has been such a salvation in my life. I’m naturally a people person, but there are times when I don’t really want to be around people. I want to be by myself, but I want to go out, and I want to make pictures. The camera gives me access to different things and it pushes me to go to places that I wouldn’t usually go to.

Were your first few days in Bombay a little scary?

Terrifying, yeah. Plus, I’m here to do a thing on the Parsis, my community, and what are people going to think, and… yeah. Initially, people would hang up on me. They didn’t understand what I was talking about, they didn’t understand what I was doing. That’s been tough. Also, I’ve never moved to a city where you meet so many people so soon. I think the city itself accepts so many different people from so many different places. I just really fell in love with Bombay, and it eventually became much easier.

“It’s like the heart, the guts of the city are on the streets, everyday. And I don’t think that will fade.”

For you, what is the most striking aspect of the imagery of Bombay?

What’s really striking is that so much of daily life is so public here. You see scenes of things that usually happen behind closed doors in other countries. The fact that there’s just so much humanity on the sidewalks—it’s almost as if someone flipped a person inside out and all the guts of the person are out there, you know? It’s like the heart, the guts of the city are on the streets, everyday. And I don’t think that will fade. At least I hope not (smiles).

How did you get involved in N.P.R.’s Along the Grand Trunk Road special series?

I met up with Phil Reeves (radio interviewer) and Nishant Dahiya (producer) from N.P.R. in Varanasi. They had already been on the road together for a while. The whole idea was to talk to the youth, because so much of the population of this country is below 25. We just felt our way from Varanasi to Amritsar, stopping at different cities and talking to really interesting young people about their hopes, dreams, the future of India, where it is, where it’s going, stuff like that. It was incredible, the young people that we talked to—everyone from elite, privileged college kids in Delhi to a young Muslim lady at Aligarh University to a street hawker at the Wagah border. There’s a fine line between modernity and tradition, and the way that these young kids straddle that line is really interesting. There’s a sense of duty, but there’s also a dream and a hope. Each one has to figure out where the pieces fit into their own lives.