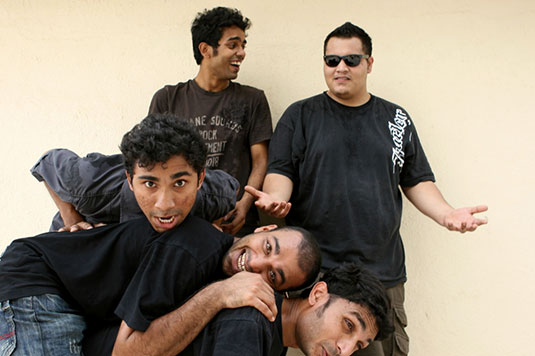 Mumbai-based Tough on Tobacco released its first ever music video for ‘Taxi Song’ on Wednesday, August 11, at 12.34 p.m. The song is part of the band’s popular debut album The Happy Goat, which you can download for free at this location. The band and video crew seem to have had a lot of fun during the making of the video. Director Samira Kanwar shared her favourite moment from shooting the video with us: “We were waiting for a shot in the taxi. A car pulled up next to us, with an entire family in it, rolled down the window and asked, ‘Bhaiyya, Bandstand khidhar hain?’ Without skipping a beat, Karan, in his impeccable theatre-trained English, responded with a polished ‘Go straight, take the first left, and then a right at the end of the road’. The four of them just stared deadpan into the car. They really hadn’t expected perfect English from a taxi driver! We died laughing!”

Produced by Babble Fish Productions, the video was shot in Mumbai, and addresses the issue of drunk driving. Watch it right here—

Download ‘Grab Me’, a new single from Thermal and a Quarter