It’s Friday night and some of us girls are together and idle alike. We decide to watch a movie. When my opinion is called for, I suggest a title that provokes the following reactions:

“Er, I was hoping for something more along the lines of grimy horror.” All About Eve film poster.

However, I manage to bulldoze these skeptics into watching Joseph L. Mankiewicz’s All About Eve. The 1950 film has no less than six Oscars to its credit, including the telling ‘Best Picture’ to recommend it. Eve is Eve Harrington, a young woman of ambition who insinuates herself into the life of ageing theatre star, Margo Channing, and eventually threatens to usurp her personally and professionally.

One can tell that All About Eve was originally written for the stage. The stern emphasis on dialogue and character development, interspersed with sparse action, makes it evident. The film happened at a point when cinema was just coming into its own, and so the style of acting is not far removed from the theatrical. The tagline—“Is all about women… and their men!”—might suggest a universe of Amazonian women to some, but what we get is a story about women and their less heroic side: Their fears, insecurities, petty jealousies, and what rankles the most—an undeniable dependence on ‘their’ men. The idea that a woman can only achieve complete happiness with a man’s requited love is one of the few contestable weaknesses of the film.

Bette Davis is captured in all her fine fury; she plays Margo Channing in the eve of her own career, as an autobiographical statement. Davis’s tempestuous portrayal of Channing is in perfect contrast to Celeste Holm’s gentler one of feminine wifehood [Karen] and Anne Baxter’s deceptively sweet Eve Harrington. Surprisingly, it is George Sanders’s laconic rendering of the acidic critic, Addison DeWitt, that won the film another Oscar (‘Best Supporting Actor’).

Incidentally, some of the most celebrated lines in cinema history figure in this film (“Fasten your seatbelts! It’s going to be a bumpy night!”). The dialogues are heavily laden with irony. Holm retorts thus when accused of being cynical ever since she left Radcliffe, “That cynicism I acquired the day I discovered I was different from little boys!” in reference to the typical cultured woman’s psyche back then. The most memorable is Davis’s monologue, where she laments the necessity of being feminine enough to captivate a man even at the zenith of one’s career—a sentiment offensive to any feminist worth her salt, but not dismissible, nonetheless.

All About Eve also won the Oscar for ‘Best Costume Design for a Black-and-White film’. It was truly deserved, for some of Davis’s and Holm’s evening gowns are mouthwateringly beautiful, as is Marilyn Monroe’s during her famous three-minute-long cameo. Barbara Bates has the other memorable cameo in this film. She appears at the fag end of the film and is enshrined forever in the final, unforgettable shot. As regards the filming, All About Eve is much like others of its time and consists notably of dramatic close-ups of actors’s faces, 12 Angry Men style.

The film showcases the backstabbing that one has come to associate with the arts, particularly theatre. It seizes every opportunity to offer insight into the director-actor-playwright-producer quadrangle, along with that important spectator, the critic.

All About Eve is a long film by today’s standards, but there is never a moment when the viewer is not gripped by the onscreen drama. As for its effect on my friends, the reader need not worry—I was triumphant. They were engrossed right through and reacted gratifyingly with exclamations and white-knuckled tension. One-up for the classics.

An amateur stargazer, a student of Odissi and the Veena besides, Kaamya Sharma is about to embark on her third year of M.A. at I.I.T.-M. As a throwback to the old times, she measures distances in furlongs and calls a commode a chamberpot. She has a fascination for Carnatic and western classical music alike, but is not averse to head banging to some metal.
Filed Under: all about eve, films, Reviews
Tweet 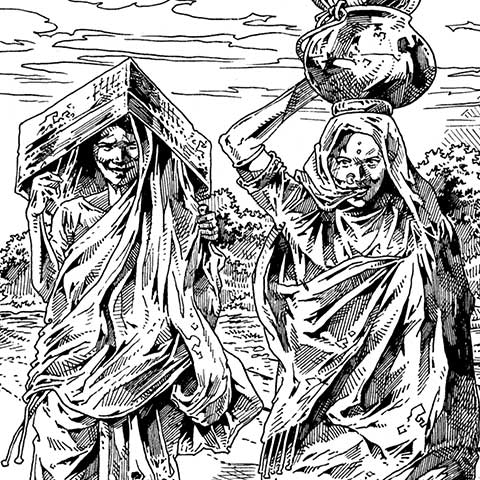