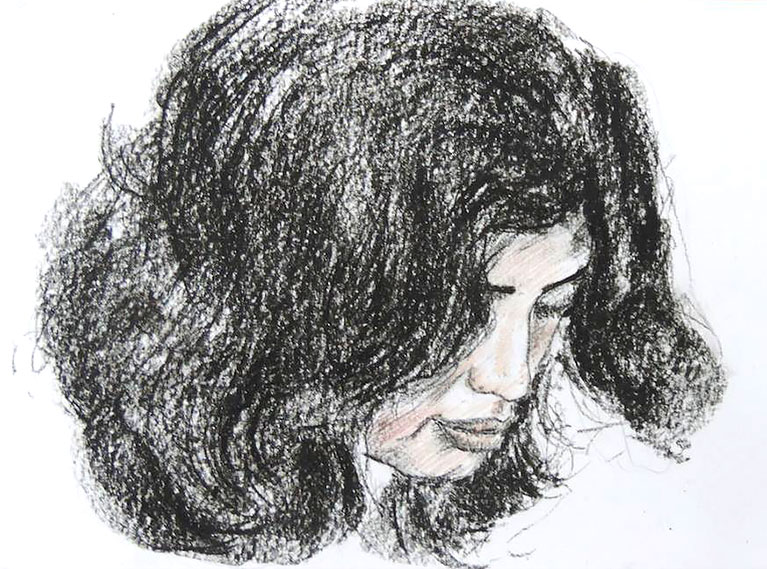 Sumana Roy is a writer whose poems and short stories have appeared in Granta, Berfrois, Poetry at Sangam, Cha: An Asian Literary Journal, Prairie Schooner, Asia Writes, Pratilipi, and elsewhere. Her essays include everything from a celebration of rhododendrons in the hills to an analysis of why the popular Dum Laga Ke Haisha isn’t as empowering as people think.

An early draft of her novel Love in the Chicken’s Neck was longlisted for the Man Asian Literary Prize, but Sumana chose not to publish it because she was dissatisfied with the story. She tells me that it takes a long time for her to write a sentence to her satisfaction. She has lived most of her life in a town called Siliguri in West Bengal—a town whose name serves as the second half of her Twitter handle and one that she has never written a poem or a story about because “the most important things in one’s life lose grace and humour when one commits them to writing”.

She speaks to us about her discomfort with the word ‘nature’, her desire to experience a plant’s-eye view of the world, and how the Backspace key is the most-used key on her keyboard. Read on for excerpts— Can you tell us a little about Siliguri?

Geographically, it is a small town in sub-Himalayan Bengal. I’ve written about it recently. It is an unremarkable small town, and that is why it is special to me. I do not understand greatness and would be uncomfortable living in a place that had the personality of a museum, living or dead.

I read that Tagore played a big role in you becoming a writer.

Buddhadeva Bose, the Bengali poet, novelist, essayist, and translator, summed it up the best for every piece of Bengali writing after Tagore: ‘It was impossible [for them] not to imitate Rabindranath, and it was impossible to imitate Rabindranath.’ Tagore, as you’d know, is everywhere in Bengal, more so now than ever before—his songs competing with the honking of cars at traffic signals, his birth and death anniversaries celebrated with religious fanfare, his poems invoked in hilarious contexts, on football grounds and perhaps even in toilets as a cure for constipation, who knows. I really cannot say whether he played a big part—or any part—in my turning to a life of the mind. One needs to see this as an outsider perhaps, as you notice your father in the shape of your lips or a grandparent in the curve of an eyebrow. I’m sure he exists in the nervous system of many Bengalis as he must do in mine.

Would you agree that the natural world is at the centre of your writing?

I have come to grow uncomfortable with the use of the word ‘nature’. I don’t understand its touristy usage. One of the reasons ‘nature’ seems like a part-time, weekend activity or a project work in school owes to this usage perhaps. As a child I had no sense of growing up amidst a version of nature, but then, neither did Tarzan. As adulthood brought in its choices of career decisions and consequent job locations, I came to realise that I would not be able to survive in a place where I wouldn’t be able to see a bird’s shadow fall on the ground.

I had spent many years, intuitively, and later intellectually, as a semiotician. I was a sniffer dog, trying to make meanings out of signs. Gradually—and I can notice this only in retrospect, of course—I was coming to grow exhausted of what I call ‘meaningitis’, the lonely human obsession with meaning. It must have been around the same time that my interest in plant life—not as ‘nature’ or its constituents, a garden or a forest or suchlike—began to take over my life. Self-analysis is always onerous. So I can only say that if there is a ‘bird’s eye view’ of the world, all I am trying to experience is the ‘plant’s-eye view’. This is a terrible simplification, for plants don’t have eyes, but it’s difficult to explain an attitude to life in an interview.

“I was coming to grow exhausted of what I call ‘meaningitis’, the lonely human obsession with meaning.”

Is writing part of your daily routine in Siliguri?

It took me a long time to realise that writing, like music and the other arts, needed riyaz, a daily kind of practice. Perhaps because I came to the rituals of writing quite late in my life, I presumed that it had to do with the romantic idea of inspiration. Unfortunately—or fortunately, is it?—nothing of the kind happened to me, except fleetingly, perhaps, when an image or an introductory or concluding line would trigger a poem. It takes me an awful lot of time to write a sentence to my satisfaction—the Backspace key must be the most oft-used one on my keyboard. My teaching job has hardly allowed me the kind of writing routine that I imagine would be fruitful. I do try to write a little every day just as I read a little every day or daydream a little every day. All of these come so naturally to me now that often I’m not even aware that I am doing any of these.

What writers have recently influenced your writing?

I am certain that we are influenced by all the writers we have read—some of them we choose as lodestones, and some tell us what we want to reject in our choice of form and content. Since my early reading habits were formed more by absences—due to a lack of libraries, both public and private, in the small town where I grew up—than by conscious choices made on my behalf by my parents or teachers, I read everything that came my way. Later, the institutionalised reading at university began to allow me a sense of the intellectual lineage that I felt closest to. The British modernists, yes, but also figures like George Eliot and Robert Frost, whose writing I chose to read as philosophy.

It was during my doctoral research that I began to escape into the poems and fiction of Bangla writers of the early 20th century. Bibhutibhushan Bandyopadhyay and Jibanananda Das, just to name two favourites, became my evening rest houses after the sunlit battles with exhausting institutionalised academic writing. Shakti Chattopadhyay is another poet I find myself returning to all the time. “I am certain that we are influenced by all the writers we have read—some of them we choose as lodestones, and some tell us what we want to reject in our choice of form and content.”

Next to poetry, the essay is my favourite form. I find that the teenage enthusiasm for the confessional tone of the mainstream personal American essay no longer interests me. My favourite contemporary essayists are Amit Chaudhuri and Dubravka Ugresic. Chaudhuri—on whose work I wrote my doctoral dissertation—is the master of the literary essay, and the connections he makes between writers, artists, filmmakers, and thought systems are a delight to spot; they are also an education. One is tempted to attempt some kind of literary espionage to see how a mind like that works. Did I mention the delicious prose? Ugresic does similar things too, making connections between disparate things. I love her experiments with the form of the essay—there is such humour and intelligence and invitations to graceful challenge in them. These two writers are also interesting to me because of their ambitions for the novel. Both have, in completely different ways, tested and pushed and enriched the genre. One needs to read Afternoon Raag and The Ministry of Pain to see what can be done with the novel.

Recently—I see that’s your question—I have also come to like Rebecca Solnit’s work, not for the range of subjects she writes about, but for the secondhand curiosity her writing allows me to experience.

Would you say you were part of a community of writers in India?

The structure of my life does not allow me to be away from home for a long period of time. Given where I live—and the choice to live a more or less solitary life that I have made—the sense of community of (Indian) writers comes to me from Facebook, where apart from the good-natured and mutual self-congratulatory exchanges, there is also efficient critique and editorial advice on work in progress.

In your essay on rain, you bring together women poets from India in a way that is rarely seen. What prompted you to write this essay?

Priya Sarukkai Chabria had asked me to write an essay on Indian poetry in English for Poetry at Sangam. Months passed and I found that I had nothing to give her. Then the rains came. I was unwell at the time. I’d watch the rains from my window and wonder, from time to time, about how others might see this disobedience of water. I cannot say why it was only the women poets I sought out for such companionship; one is never rational in one’s choices in that sense. And so this essay became a record of my dialogue with my fellow poets about the rain. You could say that it is a short memoir of my relationship with these poets mediated by the rain, and vice versa. I was surprised—pleasantly, of course—by the response that it had spoken to so many lovers, of the rain and poetry.

“The new poetry in English coming out of India is quite stunning—there is nothing comparable to it in the kind of mainstream English-language fiction that is published, for instance.”

Who are some writers from the subcontinent you wish people read more of?

I find that I read more literature in Bangla than I do in English now. Some of the poets and writers in the Bangla little magazines are quite amazing—I have not encountered such energy and even originality in journals and magazines that come out of English India. It is the destiny of writers in these chosen spaces to remain anonymous, I suppose, and so I too have forgotten their names, remembering only snatches of their writing. I’m not good with coming up with names in situations such as these. I’ve been re-reading the poet Binoy Majumdar and I hope that he’s translated into other languages. I also feel that the new poetry in English coming out of India is quite stunning—there is nothing comparable to it in the kind of mainstream English-language fiction that is published, for instance.

Talk to us about your experience of being an editor at Northeast Review.

I am the nonfiction editor and I curate what we call the ‘Tin Trunk’, a theme-based section. I’ve had a lot of fun doing this. We are a small team and so we often take time to respond to submissions. To have the chance to read work from writers across the country is an extraordinary privilege. I feel the same way about being a part of the editorial team at Antiserious. The range and variety of work, particularly in poetry, is such a treat. I wish we had more—and better—essay writers, though, and writers who were willing to look at things that do not constitute the ‘serious’. I’ve never read an essay on body odour in local trains or buses, for instance. I look for essays with texture. I am hopeful that they will come to us soon.

What can we hope to see from you next?

I find myself fascinated—and emotionally involved—with plant life in a way I hadn’t expected. Perhaps my writing will come from this place too. I don’t know, this is a difficult question to answer.