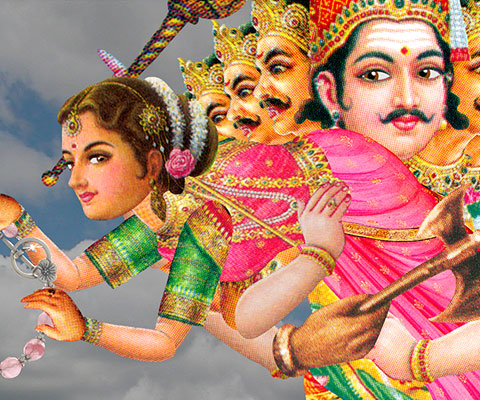 There once was a prince—or so the story goes, anyway—whose father banished him to the forest for thirteen years. At the end of this term, the prince returned to claim the throne that was rightfully his, and it is said that he ruled his kingdom with courage, integrity, and a deep sense of justice.

A lot happened while he was serving out the term of his banishment, of course: his beautiful and delicate wife, in thrall of an equally beautiful and delicate deer, asked him to get the deer for her. The prince, his foresight clouded by newlywed lust, went after the deer, only to find that it was a ruse to get him away from his wife, so that a ten-headed demon-king could kidnap her. A battle ensued, involving an army of multi-skilled monkey warriors and a supersimian with a penchant for pyrotechnics. Ultimately the good prince won, rescued his wife, and returned home to rule the kingdom of Ayodhya.

Most Indians of my generation know this story already, either from dog-eared issues of Amar Chitra Katha handed down by older siblings, or from years of having watched Ramanand Sagar’s Ramayana on Doordarshan on Sunday mornings. The part of it that very few of us spend time thinking about is the story of the wife this perfect prince rescued, but didn’t bring back: Sita. Sita, born of the Earth; Sita, the virtuous and beautiful. Sita, dumped by her husband after he went to war over her, because he couldn’t deal with the idea that she had spent a few days and nights in another man’s home. This largely ignored perspective of a forsaken woman is the seed of American animation artist Nina Paley’s feature Sita Sings the Blues (2008). But from this seed the film grows and spreads, its branches reaching for areas that straddle genres, styles, and narratives. The film sings, sways, sparkles, and entertains. But it also makes you think about the relevance of a story written hundreds of years ago, and does so with humour rather than tragedy, engaging your intellect and wit rather than your emotions and sympathies. There are no spoilers here—if you recognise the name ‘Sita,’ you probably know how this goes down. But in its method and minutiae, this film is really quite magical.

Director Nina Paley, for whom Sita is the first feature length production, separates the story of Sita into four distinctive narrative threads, of which the first three are closely linked. The first is a direct rendition of the Rama-Sita adventures in kidnap-and-rescue, starting at the point where Dashratha, on the behest of Kaikeyi, sends Rama off into the forest with Sita. The second is a commentary on this part of the epic, in the form of a casual conversation among acquaintances. The third thread punctuates the first two during moments of emotional upheaval, and is the one from which the film gets its title: the character of Sita literally sings the blues in it. Paley uses Annette Hanshaw’s classic songs of love and heartbreak, with the Jazz Age singer’s trademark “That’s all” at the end of every number.

Each of these three threads is delightful in itself, distinct not just in terms of content, but also the form and style of the animation. Paley, who has done everything for the movie save for music and voices, uses different types of animation in each of these sections, while also drawing upon traditional and popular art forms in India. The vanvaas story is animated in a style that draws heavily from Rajput paintings of the sixteenth century. The commentary takes place among three traditional Indian shadow puppets voiced by actors with pronounced Indian accents, the dialogue taking the fluid form of friends discussing a subject of common interest. In addition, Paley often depicts the subject of this commentary in the background, borrowing from the much-documented and instantly recognisable art of Indian devotional calendars. The third section is entirely musical, and while the characters featured are Indian, the music (songs by Annette Hanshaw) and the vector graphic animation style—Sita rendered as a modern day Betty Boop dressed by Maganlal Dresswala & Co.—are definitively western.

All at once, Paley manages to be funny and sharp, casual but also caustic.

This combination of various elements comes together cohesively, and is visually captivating. But it is the details—proof of Paley’s painstaking research as well as her understanding of the epic within its context—that raise the status of the film from that of a mere spectacle. From references to “Mogambo,” the iconic Bollywood villain with an unmatched evilness quotient, to the description of Sita as a “bloodthirsty” woman for having brought a war upon two kingdoms, Paley employs a generous amount of sarcasm and wit to make a point about the inherent sexism of this great myth. Yet another fantastic moment of insight comes halfway through the film, when Paley enforces an “intermission” of three minutes on her audience, creating a metanarrative where the characters of the film are still in play, but so is the audience, which is heard from off-screen, engaged in entirely plausible conversations about the film thus far. All at once, Paley manages to be funny and sharp, casual but also caustic. The film uses lightness and humour to weave together a cutting commentary on one of the greatest epics in history.

And then there is the fourth narrative thread. This section pulls us out of the glittering, mythological world of dancing deities and blues divas, and forces us to confront the reality of modern urban relationships. It is the only section not directly related to the epic, but this separation allows it to be illustrative of the ageless sexism of this ancient story. The fourth narrative thread is autobiographical, tracing the relationship arc of a character named Nina, from a point at which she is happy with her partner to when he breaks up with her after relocating to India. The animation and tone of this section are very different from the other three. Gone are the bright colours and the tingling music that evoke the psychedelic, fantasy world of the gods. Instead, Paley uses minimal (and mostly atmospheric) sound, and Squigglevision animation that tones down the deliberate beauty present in the other three sections, bringing real-life images and textures to the screen. The unravelling of Nina’s relationship belongs in the real world—in our world—where people separate and grow apart not for reasons of divine will, but because their job took them to another place, or because they were culturally incompatible, or because one of them found someone else who just happened to be more suitable for them.

We don’t know which of these—if any—was the reason for Paley’s relationship ending. Paley never gives her partner a voice, which makes this fourth section seem self-indulgent at times. But given the larger point that Paley is trying to make, the reasons for the fallout are almost irrelevant. Paley intersperses her own story with the epic narrative in a way that brings forth the parallels, foregrounding the ways in which women, within the greater narrative of the Male, are usually dispensable.

The somewhat less jocular tone of the autobiographical element doesn’t change the fact that Sita Sings the Blues remains airy and funny to the end. Watch it for the way it uses this lightness and humour to weave together a cutting commentary on one of the greatest epics in history. Watch it for its stunning visual elements, for the music, and for the quirkiness it takes to put Sita in a glamorous avatar and have her singing Jazz Age songs. But most of all, watch it because of a special appearance by Rama and Sita’s sons Luv and Kush, in a musical number that describes Rama like no traditional rendition of the story ever has.

Here’s the best part yet—along with everything else, Paley also took ownership of the distribution of her film. Luckily, she believes in making her work easily available for anyone who may be interested in watching it. Watch the film online for free at this location.