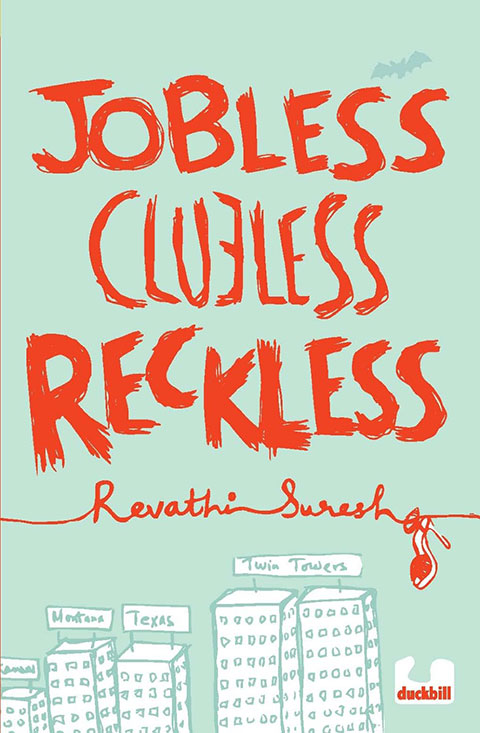 Ah, young-adult fiction. With your earnestness and penchant for over-the-top similes and metaphors, favourite tropes of annoying sibling, exasperating and embarrassing parents, and the wildnerness of friendships and relationships, it’s so easy for for you to slip into being an unremarkable affair. But when done right, what a delight you can be.

Just like Revathi Suresh’s Jobless Clueless Reckless. The novel revolves around Kavya Naresh, a home-schooled teenager with an annoying younger brother named Dhrittiman, an absent father, an insufferable, psychotic mother, friends who think she’s a vampire, a mysteriously kickass paati that comes out of nowhere, and all the ache she stores in her heart for her crush, the blue-eyed Kiran. The first line of the book is, “I’m having a Manisha day today”. The first chapter then carries on and ends up becoming possibly one of the most delightful opening chapters I’ve read in a while, in that the last line is both brilliant and wicked. The book is dramatic in the way that our lives appeared to be when we were teenagers; it is dramatic in a very real way. I mean, sure, the tropes are all done to death and it’s the same deal everywhere; the usual formula of annoying siblings turning out to be not so bad after all, the shy boys always having a crush on someone else, the popular boy being crushed on always a little bit of a douche—just enough to make it justifiable for the protagonist to pick the less popular/dramatic option in the end, but not entirely nonredeemable either. But isn’t that what you loved about your favourite books while growing up? That those books somehow totally got you. You could relate. Everything was so dramatic because our lives were dramatic.

Revathi Suresh’s world-building is praiseworthy. After the initial high of the opening chapter, the story does threaten to sag in places, but is saved each time by some wonderful humour. I think that’s where Suresh shines in this book—the humour is just masterfully done. In this world that Suresh creates, everything thrives. You can tell by the finesse of writing that this ecosystem has some rich, fertile soil, and you appreciate the time it took for it to get to this place.

I’ve been trying to use words that basically aren’t that oft-abused review term: ‘romp’. But that is exactly what this book is. It’s a gleeful, delightful romp that reminds you of all the dumb shit you’ve pulled as a young adult (or are pulling, or will pull) in a sportingly embarrassed way, and with none of the shame or regret.

Jobless Clueless Reckless is steeped in cultural references from the last three years, and uses them intelligently. The only problem with such books is that maybe five years from now, you’ll cringe at a book that refers to Jensen Ackles or Edward Cullen (not because they’re suddenly uncool, but because this book is from that far back). We’re moving so quickly from one cultural matrix to another that references to Kaavya Viswanathan’s book or Hannah Montana/the Olsen twins already seem overripe. Regardless, the rest of the scaffolding that the book is built on—the intricate world-building, the brilliant ‘Tamlish’ way of speaking, and the actual bravery of telling a story that is about nothing and everything—is pretty solid. It is a coming-of-age novel and it takes that trope head on, without cloaking it in something else. Most of the time, young-adult novels that follow that approach fail. Jobless, Clueless, Reckless does not. It is a thimbleful of coffee that stirs you up and makes you go: “You know what? Maybe every little thing is going to be alright.”