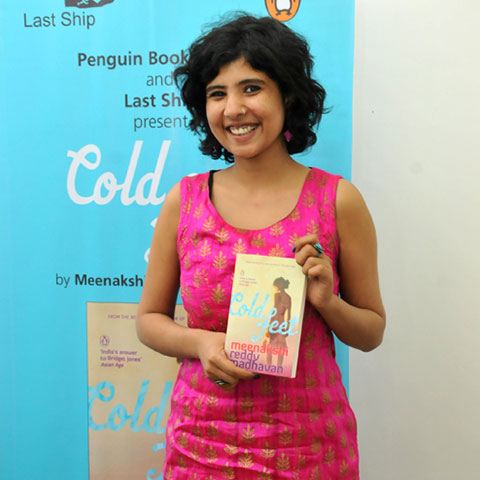 Is Your Food Depressed?

Often referred to as India’s answer to Bridget Jones, Meenakshi Reddy Madhavan, or eM, is the author of the popular blog The Compulsive Confessor. Her bestselling semi-autobiographical debut novel You Are Here was published in 2008, followed by Confessions of a Listomaniac, a coming-of-age novel aimed at young adults. With Cold Feet, her third book, Madhavan follows the lives of five young women as they navigate their way through love in the city of Bombay.

The author spoke to us in an exclusive interview about her latest novel and why she dislikes the term ‘chick lit’. Read on for excerpts— “Cold Feet actually originated from a short story I wrote on marriage.”

How did the idea for Cold Feet come about?
Cold Feet actually originated from a short story I wrote on marriage. The idea of marriage as a goal, part of our Indian woman checklist (or just a general woman’s checklist) had been playing on my mind a lot for the last few years, ever since I’ve been getting a steady stream of invitations in the mail. It was at a friend’s wedding that I began thinking of the others—the ones who really don’t want to get married but do anyway, just because it’s a goal they feel they have to reach. From the short story it grew into the idea of various kinds of relationships and different women and how people react to love.

How did you prepare yourself for the task of dealing with five separate protagonists? Can you describe your writing process?
I read a LOT of books with multi-character plots. The only one that stands out is Cloud Atlas, which intimidated me so much by how good it was that I couldn’t write for another month. I began by knowing that I wanted everyone’s lives to sort of touch each other but not be fully involved—kind of like Love Actually? If everyone was B.F.F. and hanging out every day, it would be a bit like That Show Which Must Not Be Named, right? Actually, it wasn’t quite so conscious as that. It’s just that in my own personal life, I don’t have a “gang” per se, lots of different female friends, and so, to me, this felt more accurate.

Then I began with what is now my nameless character’s story, without really knowing who she was or what she wanted and then everything began to come together quite quickly and it was all very exciting. I normally manage to write straight up, finishing three to four thousand words per day, but this book had more plot than [what] I had done before, so many different people to get from point A to point B, that it went a lot slower. A lot of times I wondered if I had bitten off more than I could chew, but it was also quite challenging, which I think is important for writers.

“Twitter is a novel-killer. You begin with one pithy 140-character update and before you know it, it’s 6 p.m. and you’re having a fight with someone about the right kind of cocktail to drink on a beach.”

Was it difficult to keep track of the different characters, especially since the story is mainly narrated in first person? How did you manage to separate each of them?
I worked on each story arc separately, writing chunks of each character and then breaking them down. It’s interesting how many questions I get about technique, especially since there’s really not much science to it. I made a list of my characters and their story arcs—just to keep them straight—and then began to weave them into each other. The real challenge was trying to make it look natural, not gimmicky, not something I had gone back and forth a million times with. Also, yes, distinguishing their voices, I had to read from where I left off and think, “Would this person use this word?” Meenakshi with host Kian Ganz at the launch of Cold Feet in Pune. Photograph by Arun Kale.

One of the characters is a lesbian who remains unnamed until the very end of the book. Did you specially set out to include a lesbian character or is that just how it evolved?
That happened pretty much by accident. I began writing about her seeing the girl she loves at a party and I was enjoying the second-person voice and then I started thinking, “Who is this person?” and it quickly became clear to me that it was a woman. I was a little hesitant at first, but she really came to me the most easily, her voice, her personality, what she looked like, and so on. I wanted to write about someone lonely in Bombay, because Bombay can be super lonely, and she was representative of that.

Out of the five women, with whom do you identify the most? Do you have a favourite?
Akshara’s story and mine most collided, she’s sort of like the grown up Arshi from You Are Here. I loved writing about my nameless girl—her story was interesting and intense—and Shayna, because I got to do her very young, very cool inner voice.

While working on a novel, does blogging interfere with the writing process or aid it?
I can’t write two long-form things at the same time, so my blogging was mostly minimal—just life updates so that my readers knew I wasn’t dead! Twitter on the other hand… Twitter is a novel-killer. You begin with one pithy 140-character update and before you know it, it’s 6 p.m. and you’re having a fight with someone about the right kind of cocktail to drink on a beach.

In Pune: Amruta Patil to Discuss Her Work and Creative Process

“Mostly, I hate that my books are described by my ovaries.”

You have often expressed dislike for the term ‘chick lit’. Why is that and how else would you classify your writing?
Commercial fiction! It’s not a gender term, it describes writing that is easier and more fast-paced than literary fiction and it means that anyone can read it, not just “chicks”. Mostly, I hate that my books are described by my ovaries. Romance, if you like. Coming-of-age is another term that works. Just, please, women have to stop embracing writing aimed at them because it means that people feel that they CAN aim writing at women, that it’s a gender thing.

After Cold Feet, what’s next for you? Can you tell us about your plans for future projects?
I’m doing a lot of work with my full-time job as editor of Brown Paper Bag, Delhi, and just letting the writing muscles rest a little before I move on. That being said, I’m thinking of a more memoir-style next book, but not so much about love and relationships any more. I mean, obviously those two things creep into everything, but I’ve been thinking about working with other things. It’s still very early days though—I’m letting the idea gestate a bit before it’s ready to be declared!

Click here to get yourself a copy of Cold Feet.

The Coast and the Inland