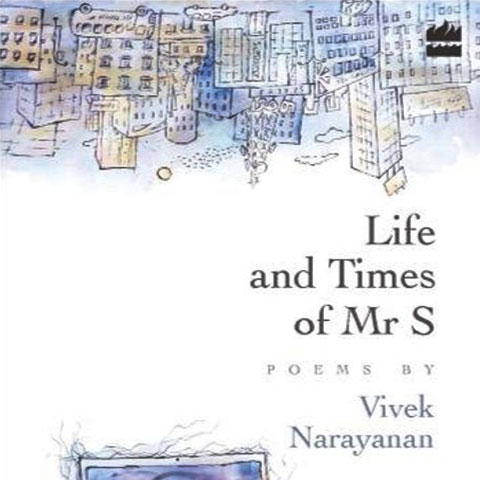 Vivek Narayanan has lived in India, southern Africa, and the United States, and continues to divide his time between India and the States. This journey of fractured geographies resonates in his work: restrained in his verses, Vivek manages to inhabit the space between “the coast of saying too much / versus the inland of saying too little”.

His poems and short stories have appeared in Harvard Review, Pratilipi, The Bloodaxe Book of Contemporary Indian Poetry, International Literary Quarterly, among other publications. A prominent poet on the contemporary-Indian-writing-in-English scene, he also designs and facilitates writing workshops and co-edits a literary journal, Almost Island. His books of poetry, Universal Beach and Life and Times of Mr. S, have been published by HarperCollins India.

Read on for excerpts from a recent interview with the writer— Where and when do you usually write (and for whom)? Do you prefer typing or writing on paper?
Except for [whom], these are questions of ritual and superstition; every writer has to discover and invent them for his or her self. And they change! They’re personal, although they are important. I write in the morning like several (but by no means all) contemporary bourgeois writers seem to… except when I find myself writing at night, which happens sometimes if I’m in the mood. I do a mix of typing and writing on paper. Poem drafts are often on paper, except when they’re not, which happens. Poem drafts go from paper to screen so there’s a way to live between. Confused? Well, you will be. I love writing on paper for the momentum I can make, my whole arm and body and spine putting its weight into the physical act of writing. It’s a great way to get started. Keyboard typing I feel in my brain and in my prematurely arthritic wrists and fingers. But typing is usually more expedient, and moreover it’s instant printing.

As for whom, all I can say is, who knows? Rashmi Sadana (my partner) is always my first and toughest reader, and sometimes I write poems to specific people…

You perform your poetry, and while I was reading your latest book, I was struck by the acoustic possibilities of your poems. Is that a conscious concern when you’re writing?
I would say, in certain phases, in the heat of writing the poem, the acoustic possibilities are the only—or at least the main—conscious concern. Then I have to come out of that, go read and see what I did, see if there’s anything there, and also face the fact of how it’s going to be read unpredictably by a complete stranger.

Could you share a favourite writing memory with us? Or perhaps a favourite reading?
Well, nothing specific that would make sense, but yes, those fevered all-night writing sessions are great when occasionally they happen! It may or may not result in a real or good poem, but it’s fun while it lasts.

“I love writing on paper for the momentum I can make, my whole arm and body and spine putting its weight into the physical act of writing.”

Nowadays, nearly everyone has one foot here and one foot there. What does diaspora mean in a world where everyone is beginning to inhabit that state?
Good question. Diaspora can no longer so easily imply any centre or reference place but [is] more just a deep cluster of ideas, a historical conversation that’s important for all the creativity it’s produced, and still relevant to mark, because the particular and the subjective (i.e., the opposite of “objective”) are sources of knowledge, and because, well, evidently, regardless of what we’d like to believe, we have not yet ironed out all racial, national, and ethnic hierarchies! So these things stay while we work them out, complicate, exchange properties, intermingle them.

One of my favourite things about Life and Times of Mr. S were the one line poems. It was interesting to read in another interview about how some of them are longer poems hacked down to that single, powerful line. Impactful as these poems are, is there a part of you that found that process a compromise?
No, not at all, not in the least. I loved throwing away all that excess language! (laughs) Life and Times of Mr. S by Vivek Narayanan (Purchase)

Could you tell us a little about what the conception and future of Almost Island?
Almost Island started out as an idea in the amazing and amazingly well-read brain of Sharmistha Mohanty, and she’s really been the prime mover for this all along. While it’s been a fantastic collaboration, I’m really grateful to her for driving the project.

What I think happened was, we started out sharing a number of dissatisfactions with the way the so-called Indian literary scene was working, both strangely inward, nationalistic, regionalistic, nativist, and slavishly hankering after international—especially British and American—honours and validation. And we wanted to have more adventurous, risky pathways and connections through the world. So in other words, running a journal turned out to be most importantly about working out a particular ethics of literature.

In this, we don’t know where we’re going, but we’re feeling our way toward it. Someone called us a “slow journal”; I see what they mean. We didn’t want to be the sort of magazine that had thousands of writers in every issue—the Internet already does that kind of plenitude very well. Instead, with most of the people in the journal, we’ve already been reading them for at least a year before we publish them. The decision to include someone requires both of our agreements and isn’t taken lightly. What I really like to do, if I can, is read an entire manuscript and then make a selection of at least 15 pages. We like substance. Sometimes we might have a 60-page essay, like Sonam Kachru’s The Last Embrace of Colour and Leaf about Asvaghosa’s poetics, which is a must read for anyone seriously interested in the connection between Sanskrit, “disjunctive poetics”, and Buddhism. Obviously, what I don’t do is get a submission of three poems from a complete stranger and choose one.

Indian poetry in English is rapidly becoming a force in its own right. And the fusion between Western influence and indigenous inspiration is palpable in this space. How do you relate to the work of your contemporaries? Do you see similar anxieties in their writing?
Ah, “contemporaries”, a much nicer word than “peers”, thank you. My contemporaries are all those who share this time with me, regardless of their age. But who exactly are my contemporaries? It’s hard to say. I think of all my poetry friends and correspondents in India, that is, to define the phrase even more precisely, to make it more concrete, all the people who read Mr. S thoroughly in manuscript form and contributed vitally, crucially with their incisive thoughts: they, and others elsewhere, really helped me shape it; in that sense, they wrote it with me, even if I took the final decisions and they’re not to be held responsible for the book. Janani Ambikapathy, Vahni Capildeo, Adil Jussawalla, V. K. Karthika, Aditi Machado, Sharanya Manivannan, Sharmistha Mohanty, Karthika Nair, Gieve Patel, Debasri Rakshit, Mani Rao, Allan Sealy, K. Sachitanandan, Sridala Swamy… I’m sure I’ve missed out someone, but never mind, it’s an artificial list.

Now just looking at this amazing list, all the people on it, I’d be really presumptuous to speak on their behalf, about anxieties or anything else! Perhaps we are dealing with some common problems, yes. However, I would not say it’s a problem of “Western influence and indigenous inspiration” exactly. I would prefer to keep Ramanujan’s words as motto: “I no longer can tell what comes from where…”

Life and Times of Mr. S moves away from Universal Beach, yet remains anchored to it in some ways. Where do you see your writing going next?
I am now writing a book of poems, I’m calling The Jewelled Deer, which riffs on Valmiki’s Ramayana.