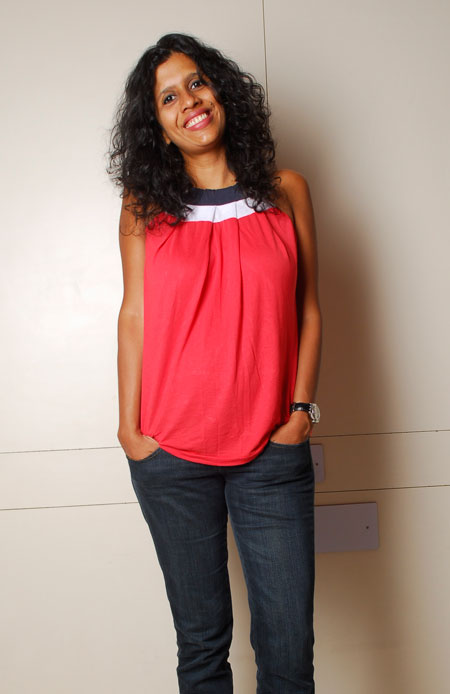 Veena Venugopal is a journalist, blogger, and most recently the author of Would You Like Some Bread with That Book? (Yoda Press). She has a love of books and bookstore fantasies, and in her collection of 14 essays she looks back on her life through a few memorable books that have become her unintended memoirists.

The following are excerpts from an exclusive interview with
the author— “Writing the book was hugely liberating. It was, by far, the best 18 months of my life.”

Everybody has bookstore fantasies, about the people they could meet and the conversations they could have. In Would You Like Some Bread with That Book?, you talk about your love affair with books and bookstores. Could you share an early bookstore memory with us?
I grew up in Cochin, in a sleepy township. So my early memories of places where books reside are actually libraries and not bookstores. Perhaps, when I was 10 or so, my father started travelling a bit for work and he would buy books and inscribe in them his name, the date, and the place where he bought them from—Delhi airport, Blossom Books in Bangalore, etc. I was most fascinated by Strand, Bombay. I had these very 19th century London images when I read that name, of men in top hats and long-tailed coats getting off horse carriages and walking into this massive Victorian bookstore. (Decades later, when I first visited Strand—this tiny store spilling over with books—I had to step out and take a few deep breaths. It was one of my more marked disappointments between fantasy
and reality.)
The first real bookstore I visited was Landmark in Chennai. I had moved out of home and gone to college in Chennai and found myself spending the very limited allowance I got in taking a rickshaw to Nungambakkam road. Landmark was a massive store by the standards of early-1990s. In the three years that I lived there, I spent a lot of time browsing in Landmark. The first fantasy I wrote in that essay, about being a college student and meeting someone at that store, was one I thought about a lot then. I have spent an inordinate amount of time watching that door and willing the next guy who walked in to strike a conversation with me. Alas, that never happened.

‘Every reader, I am certain, has a book that is a barometer of their lives, a keeper of records, an unintended memoirist.’ If To Kill a Mockingbird defined your childhood, what book would you say defines who you grew up to be?
I must confess I haven’t thought about this. I have, as I have grown up, tried to define myself by an author I liked. So there was an Erica Jong phase, there was a brooding Somerset Maugham phase, a semi-adventurous Hemingway phase, etc. Actually, that’s the wrong tense, these phases are still there; sometimes I go through several of them in the space of a day. I can’t really say that there is a book that defines who I grew up to be.
What I wanted to highlight with the essay on reading To Kill a Mockingbird every year was how every reading of it helped me understand myself and the world around me a little better. As an adult, the book I have re-read the most is a little known work of Andre Brink, called States of Emergency. Its narrator is a nameless author who wants to write a love story that is untarnished by the politics of apartheid in South Africa at the time. It’s a story within a story of the author and his characters—a professor who falls in love with his student. But politics intervenes all the time. It is a cheeky narrative, a bit of a tricky book. And every time I read it, I find a subtext I hadn’t previously discovered. (It also helps that I am a huge fan of younger woman-older man relationships.) It is certainly the last book I want to read before I die, if one has a choice about these things.

“I think that in a mainstream context, no one has really talked—especially in the first-person—about sexual awakening of girls in India, and my essay seems to have found resonance with a lot of people. This, I am very pleased about.”

Your book reads like a diary, a cross between a novel and newspaper articles that have been strung together. The nonfiction genre is gradually emerging in India, and the growth of feature journalism is a large part of it. Tell us a little about the genesis and development of your book.
In 2010, even though I had never even gone for a day trek, I found myself joining a group of friends on a trek to Everest Base Camp. It was long and for a novice like me, quite an arduous one. Despite everyone’s misgivings and warnings, I did not even train for it in the two or three weeks that I had before the trip. I read Jon Krakauer’s Into Thin Air as preparation, time I should have otherwise spent in the gym. Even when I landed in Kathmandu, I was worried about finding a good book to read during the trek than the physical challenges of being able to walk such a long distance. I bought Joe Simpson’s Touching the Void. The trek was harder than I imagined, and in Simpson’s book he details the story of breaking a leg while climbing the Siula Grande. He was left to die, in fact. I came back and wrote a blog about this; on being the only fool whose worry was about finding sleeping-bag-appropriate reading and inadvertently making Simpson my climbing partner. My publisher, Arpita Das of Yoda Press, read this and called me to ask if I would be interested in writing a collection of essays about books and reading. And that’s how the book came to be.
I had at an earlier time also written parts of the essay on To Kill a Mockingbird. The idea was that the essays had to be personal and I looked at books and genres where I had a life story to tell. As things turned out, I sent the first draft of 14 essays and Arpita had reservations about one of them. It was on reading about North Korea, and she felt it was too similar to the one about Saudi Arabia. This was three months after I was done with the draft and I told her I’ll write a replacement essay and wrote Losing My Character, the essay about reading and discovering about sex. It is, not surprisingly, the one I get the most emails about from readers. I think that in a mainstream context, no one has really talked—especially in the first-person—about sexual awakening of girls in India and it seems to have found resonance with a lot of people. This, I am very pleased about. Would You Like Some Bread with That Book? book cover.

Following from the previous question, how different was writing a book from your professional journalistic work?
It was very different [and] lots more fun. I took about a year-and-a-half to write the essays. There was so much more freedom to write in the way I wanted to. The author’s point of view is absent and often irrelevant in professional journalism. You are merely reporting someone else’s experiences or explanations. You can shade the narrative to slant towards what you believe, but beyond that there is very little of you in the story. Writing the book was hugely liberating. It was, by far, the best 18 months of my life.

Do you have a favourite place or time of day to read?
I read everywhere, all the time. I carry a book no matter where I’m going and read in whatever snatches of time I get. I do read, uninterrupted by work, T.V., or my daughter, for at least an hour before I go to bed. I don’t really have a favourite place to read, although my ripped 10-year-old sofa is perfectly grooved for my ass. The only place I have difficulty reading is in a coffee shop or restaurant when I am dining by myself. While I believe most people would rather hide behind a book in a situation like that, I am drawn to watching people around me, filing characters, events, and even conversations to be written later.

Is there another book in the pipeline? What’s next for your writing and career?
I have been plodding this last year, trying to write fiction. It is the hardest thing ever. So much so that I am convinced that the phrase “it’s not rocket science” should be replaced by “it’s not writing fiction”. I am certain there is something good in there somewhere but it will take a few years to emerge. I do have a couple of ideas for nonfiction, which I want to pitch to publishers. I am hoping to scale down on my day job and focus on this soon enough.