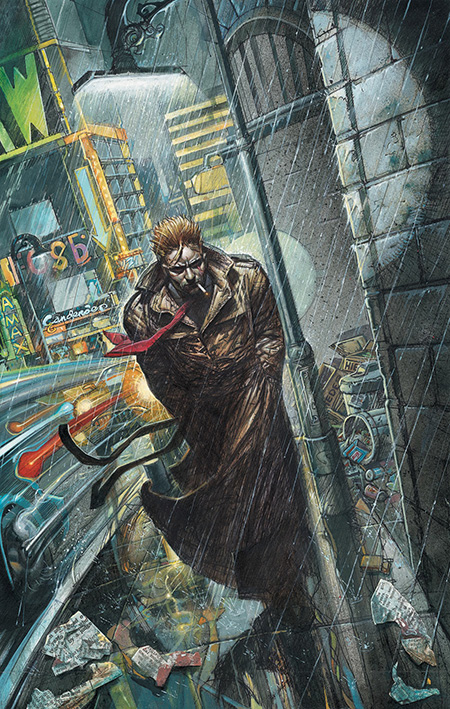 Today, ladies and gentlemen (especially the ladies), I present to you John Constantine. For the next few minutes, I would like to ask you all to forget about the Keanu Reeves movie and completely eradicate traces of its existence from your mind. Trauma-inducing as it was, thankfully, the books are anything but.

Vertigo’s longest running title, it is the Hellblazer series that introduced to the world John Constantine, way back in 1985. The protagonist, yet the antihero—one who makes us realise that it’s always the bad boys who win the game. Brit and hot, he is possibly more fitting at a rock concert than the pages of a comic book. Mister Weirdness Magnet here is profanity-spilling; he is cynical; he is a sorcerer, and yet he has his heart in the right place, as he fights to maintain the equilibrium between heaven and hell.

Come 2010, our occult hero is back. This time around, Alan Moore, Steve Bissette, and John Totleben are conspicuously absent from the list of credits. But fellow geeks, let me tell you, Jamie Delano, John’s chronicler from the Vertigo series, is back! So our trench-coat-clad antihero, who also happens to be an abrasive drunk, starts his journey this time from the ornate interiors of a museum. Thus, on the occasion of Hellblazer’s twenty-fifth anniversary, John presents to us the extremely controversial and heart-breaking thought of his sexual relationship with a Muslim woman, Aseera. Seductive, charming, and smooth, she soon manoeuvres him right into the hands of the MI5 who, of course, know all about his identity and past. The question that obviously arises now is: Why on earth does the MI5 need him? The answer: Yet another obvious one. Dirt in Iraq; that needs some heavy-duty, undercover cleaning up. And our dear ol’ John is the right man for the job! With the beautiful Aseera for an accessory, John finds himself in the scorching deserts of Iraq, a terrorist camp and a malicious threat that is now providing entertainment to the immortal ones. A mere game of poker, the immortal demons play—and the stakes? Human souls. Of course!

John, consequently, sets off to set things right, but the question remains: Will humanity suffer, or the undying soul of John Constantine?

The Iraqi setback is somewhat ironic for our hero to find himself in. But then again, us lesser mortals have had our fair share of it, so why should John be left out? Especially now. It is perhaps Delano’s way of proving to John that without him, his own heroism falls flat on the pages—and the journey through yet another hell is what proves to Delano that without John, he would have never been catapulted to fame.

An issue of war, being addressed through the pages of a graphic novel, is not entirely a new idea. But the way in which, the whole situation is depicted, drawn, coloured, and lettered, makes one realise how incredibly futile war is. Like a drug-rush: One hit and a vacancy is somehow filled, images are conjured, and then it ebbs—back to the point of emptiness and despair.

If this was any other graphic novel, I would have been bawling my eyes out, writing flowery phrases about the heroism and sacrifice and everything else that goes along with it. But hell, it’s John! Lost amidst the blistering sand-dunes and blinded by bullets, he does nothing more than shrug, as he indulges in a game of deadly poker, with a sexy smile to accentuate his imperfections more.

While I was still in school, Paradise Lost made me realise that bad is essentially attractive. Now, with Hellblazer, it’s a fact. Confirmed. Especially if the bad calls himself John Constantine, while lighting a cigarette and running a hand through his blond hair!