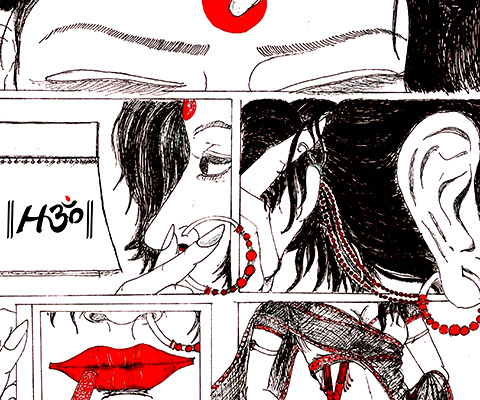 Mumbai-based electro-pop/rock outfit Laxmi Bomb released their debut E.P. last month. Titled Hॐ, it features all of four tracks and is available for download here. We caught up with vocalist Keegan Pereira for a quick chat about the E.P. and their very first music video. Read on for excerpts— Tell us about the origins of Laxmi Bomb.
Laxmi comes from a very humble background, the genesis of which can be derived from the title of the debut E.P., Hॐ. That’s where it all began. From the land of salt-pans emerges a young blossoming girl with a dream of making the city her ‘sugar-daddy’. And the D.N.A. for the same is represented through her name—Laxmi Bomb. She comes from a ‘true old-school romantic universe’ where beauty still lies in the message and the melody, sans the make-up. As for the Bomb; that’s just her wicked little wild side.

Mr. Levin Mendes (drummer, Bombay Bassment) is the man responsible for what we’ve come to term as his ‘love-child’. He shed light on ‘Laxmi’ to Keegan Pereira (ex-vocalist, Aftertaste) in April 2013 after devoting endless ‘man-hours’ into developing, shaping, and honing her sonic identity. Over the next five months and countless ‘sessions’ of creation and combustion, Laxmi Bomb was finally rendered with a voice, vision, and a visual (not to mention an introduction to keyboard and sample player Joaquim Cosmos Fernandes later that year).

Did you have any particular theme(s) in mind when you began writing/recording the songs for Hॐ?
Hॐ is a theme set in stone—a precious one at that. In a modern day blitz of high-tech gadgetry and audio warfare, the hope is that the honesty of Hॐ will shine through. It’s an expression of individuality and love without the Freudian super-ego (read new-age-production value). And that’s a consistent process peppered throughout the E.P. Laxmi is local, dressed in the fabric of the city, and speaks ‘English’ at Hॐ.

“Laxmi is local, dressed in the fabric of the city, and speaks ‘English’ at Hॐ.”

Do you have any anecdotes to share from the songwriting/recording process?
Laxmi’s first night-out was at a house party. A few hours and a few shots later, we slipped Laxmi into the scene (not as a date-rape drug but into the playlist). It was interesting to note, the moment ‘Major Major’/’Reggae Rasiya’ started spinning, the dance routine of the ‘party-people’ became very ‘dhinchak’ or ‘Bollywoodish’ so to speak. The wobbles were done with; the drum ‘n’ bass body-bending moves were dismissed. And out came the ‘thadka’ and the ‘jhatka’. That’s when we knew, Laxmi has arrived Hॐ.

You have released a music video for ‘Major Major’, one of the songs from Hॐ, which has been very well received by fans in the local music scene. Why did you pick that particular song for your first video?
‘Major Major’ is about the perpetual conflict in each one of us. It’s the battle between the heart and the mind. It’s the trouble-shooter and the trouble-maker; the hedonist and the pacifist. Simply put, it’s beauty and the beast.
The video depicts both sides. Major Major is the sergeant in command, in full authority of his troops, marshalling orders at the tip of his fingers. But he’s also the loopy-lieutenant with a will of his own, on a mission to self-destruct. P.S.: Laxmi loves them both (smiles).

What was behind your decision to release the E.P. online for free? Is a promotional tour on the cards as well?
The E.P. is available for free download for a month only, post which it will be available on various online stores. As for the promotional tour, from April onwards you will find Laxmi in a lot more cities.