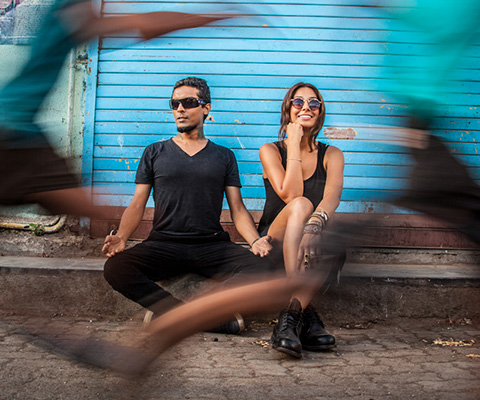 In their almost nine years of existence as electro-rock act Shaa’ir + Func, Monica Dogra and Randolph Correia have seen their share of ups and downs: they have released three albums together, won a number of awards, been through various line-up changes, and performed at pubs, colleges, and music festivals across India.

The duo released their fourth album at a private listening session in Mumbai last month. Titled Re:cover, it features re-imagined versions of eight of their own songs, including hits such as ‘Swirl’ and ‘Juxtapose’. Prior to the release of Re:cover, the band (including drummer Aditya Ashok and bassist Rohit ‘P-Man’ Pereira) had been touring India extensively for close to a year, and they spoke to us about life on the road as Shaa’ir + Func. Read on for excerpts—

“Life on the road with Shaa’ir + Func? Hmm… we fly, drink coffee, and listen to P-Man’s ridiculous, absurd jokes that are mostly too embarrassing to find funny. Randolph starts talking about an idea he is really passionate about, and doesn’t stop talking about it for at least 10 minutes. I interrupt him with my two cents. Aditya and I branch off and start talking philosophy, maybe about something cool we’ve just read. We all make fun of each other for wearing shades indoors. We’re almost always louder than the people around us.

“When we’re on the plane, we stay hidden under hats or scarves (to make it darker) and sleep. Usually after we check in to our hotel, Div (Divyang Row Kavi, sound engineer) and Aditya leave for soundcheck. I usually tell Aditya to keep it down. Drum check is my least favourite sound in the world—doop, doop, doop, doop. I love Aditya, though. So much. A couple of coffees and maybe a fresh juice or two later, we are writing out set lists, sweating through soundcheck, and warming up. I jog in place, stretch, and do squats, after a small vocal warm-up in the loo. Aditya air-drums, Randolph and P-Man stretch, and Div looks on amused.

“We’re almost always louder than the people around us.”

“While we’re playing the gig, we dance, laugh, sweat on each other. P-Man’s bass guitar usually rips some of my hair out. It’s hard to see where I’m going with all the lights and music and the pressure of breathing—fitting that in gets tough sometimes.

“Afterwards, we shower, and eat together in our hotel room. We’re accompanied by cigarettes, portable speakers, and whoever our extended family is in whichever city we are in at the time. Once or twice, we’ve just kept our heads low and jumped into pools after gigs. No one seemed to mind (though the chlorine was a bit intense).

“Thing is, tour life is like a family trip with the main purpose of playing a wicked show. We climb up to the high, achieve it, and join each other in the comedown. You’d have to be a fly on the wall. We’re just idiots together. And it’s really fun.”

“My two favourite touring stories with Shaa’ir + Func are from the trips to the Ziro Festival in Arunachal Pradesh and the Magnetic Fields Festival in Rajasthan last year. The drive from Guwahati to Ziro Valley was breathtaking—such blue skies, greenery, and natural beauty all around. We were put up with a lovely host and the organisers took care of everything for us. The vibe of the whole festival was amazing, [there were] some lovely bands and performances. I met up with friends, did my first camping experience. It was a music concert in the clouds. I took a piss in the clouds as well. Shaa’ir + Func had a smashing gig. Hopefully we’ll get a chance again to play at Ziro again.

“The Magnetic Fields Festival was by far the best music concert I have ever experienced. A festival in a freakin’ palace! We got to stay in the palace as well, ballin’ with the royals. Again, there were some super performances, and family and friends were there. Other things I remember from the festival are meteor showers, all-night-long partying, oily food, and the cold of the desert. I can’t wait to play there again. I would recommend Magnetic Fields to music-festival-attending peeps everywhere. It was an experience I will take with me to my grave—and I hear the next one is going to be more mental. Fuck yeah.”

“I loved the Ziro Festival as well. Touring with Shaa’ir + Func doing club shows and festivals is one thing. But our experience at Ziro really brought us much closer together than we’ve ever been. Trying out all kinds of food, midnight walks through fog and mountains, day treks, pitching tents, getting shit-faced on rice beer and millet wine, playing Yanif (Haneef?) at every possible moment, and of course, having a slamming set at the festival—all of this made Ziro unforgettable!

“Our experience at the Ziro Festival really brought us much closer together than we’ve ever been.”

“Another really fond memory is from not too long ago, when I got to play a show with Shaa’ir + Func on my birthday in my home city, Bombay. Monica got me a bottle of whiskey and the green room witnessed quite a party, with not just the band, but also friends and fellow musicians. It was the second birthday I spent with Shaa’ir + Func and they just keep getting better!”

“As an artist you want your message to go out to as many people as possible, and if you’re a musician like me, then touring is the best way to do it. For me, a message is an interaction. It’s not so much about imposing viewpoints in tune and key with a bunch of beats—it is the exchange of energy that especially draws me in. That level of connect and communication with the audience is a lesson in itself. It’s different every time and that makes it even more beautiful.

“I learn and I keep learning and I am truly grateful to be walking this path.”

“Sometimes you are angry and humbled and other times in a trance or in an inexplicable form of ecstasy. The journeys are tiresome, yet you take away the culture from the places you go to. In India, you are living in the past and the future at the same time—there are places that are modern, and there are places that are more traditional that you would ever have thought. So you see many joys.

“But even more important than all of this is my band that I travel with, a bunch of vigilant gangsters, philosophers, poets, businessmen on some days, and brothers and sisters, nerds, geeks, and jokers on another, or sometimes all at the same time. It happens and it is the highest of most companies. They are my teachers, my guides, my love, and a part of my soul. They help complete the music and they shine a whole lot of light all the time. Now that’s some serious electricity and some serious company on the road aside from them lovely bitches, dogs, and sharks. I learn and I keep learning and I am truly grateful to be walking this path.”