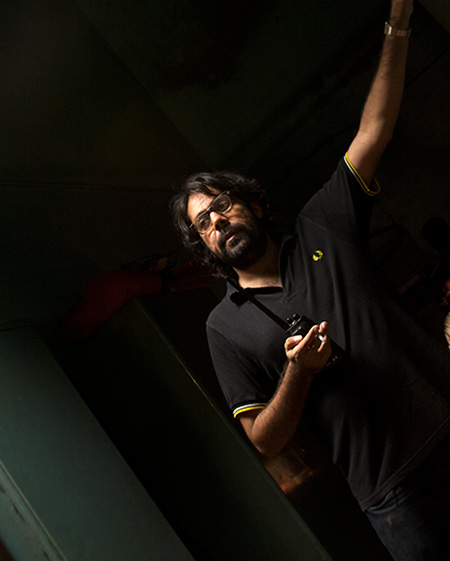 Ashim Ahluwalia’s lens may train on the same things you and I see, but there’s a slant in its gaze and a filtering process that discards the tinsel surface in favour of the murk underneath.

His first feature, John & Jane, showed us the split lives of young, ambitious call centre employees and the strange mixture of alienation and acceptance they experience. It was an unusual take on the oft-repeated ‘success story’ of the newly resurgent Indian economy and its upwardly mobile classes. His yen for untold stories also led him to explore the ‘C-grade’ horror film industry in India, resulting in the much-acclaimed Miss Lovely. “As someone wanting to make films, I found myself always being forced to choose between Bollywood and a more personal kind of film.”

When most people talk about the negative aspects of holding a call centre job, they’re usually talking about the toll it takes on the health. Not many talk about the psychological impact it could have on the call centre employees. Was that why you decided to tackle that angle in John & Jane?
When I first heard about call centres almost a decade ago, there had already been some news reports on the subject, but most of these were about business advantages and technological growth. Everybody was excited about all the new investment that would flood into India, but nobody seemed to be curious about the people who worked there—and there were more and more people I met who worked in call centres.
For me, the idea of virtual ‘call agents’ with fake American identities who talked on the phone all night seemed straight out of science fiction. I imagined that this job must have been some odd psychological side effects, because it is quite a bizarre job if you think about it.

John & Jane is not exactly complimentary to call centres. Was it difficult getting permissions to shoot inside the offices and to interview the employees so extensively?
Yeah, it was very difficult. We were always told what angles we could shoot, who we could talk to and what was restricted, which was a lot. Of course, we just went ahead and shot what was interesting to the film and didn’t think about restrictions that much. Miss Lovely again tackles a very difficult subject. What was your modus operandi for getting to know the ‘underbelly’ of the Bombay film industry?
For about a year I spent a lot of time hanging out on the sets of Bombay’s ‘C’ grade film industry. I was planning a documentary about the shooting of a sex-horror film called Maut Ka Chehra—a feature that was being cranked out in four days by a bunch of ex-convicts. But the documentary I was trying to make never happened—everyone refused to be interviewed. Most of them had gangland connections and their work overlapped with actual pornography, which is obviously totally illegal in India. I was kind of depressed about having all this research and nothing to do with it. Eventually I just wrote a fictionalised script out of these characters and stories and called it Miss Lovely.

What was the starting point for Miss Lovely? A particular movie you watched or a story you read?
As someone wanting to make films, I found myself always being forced to choose between Bollywood and a more personal kind of film. I didn’t want to make a star-studded extravaganza and I certainly didn’t want to reheat the traditional “Indian Art Film”. I just wanted to make something closer to the kind of person I am. Then I chanced upon some crown jewels of gutter cinema—Private Life by B. K. Adarsh and a bunch of sex-horror films by Mohan Bhakri and Vinod Talwar. I was amazed. This was like the Japanese New Wave, Mexican horror, and Laurel & Hardy all cooked into some weird desi gravy. I really felt at home with these movies, they also allowed me to think about Indian film in a new way.
I think Miss Lovely is the product of all these accidental influences.

How long did it take you to complete work on both films?
Probably too long!

“I am not too interested in mainstream Hindi cinema, nor am I very excited by Hollywood, for that matter.”

How do you know when a story is going to be compelling enough to film?
I think if you can stay with an idea for five years, it could be worth shooting.

Does the ‘mainstream’ Hindi film industry interest you at all? If you were to make a movie about A-listers in Bollywood and their N.R.I.-oriented cinema, what story would you like to tell?
I am not too interested in mainstream Hindi cinema, nor am I very excited by Hollywood, for that matter. Not for any other reason but the obvious one: I would never have the complete freedom to make what I wanted to in any mainstream film industry; there would be too many conditions and expectations on what the film would need to deliver big box-office figures. My films don’t really fit into that system.

What projects are you working on right now?
I’ve got some things, mostly in a very different universe from Miss Lovely. A couple of projects are based outside India, which is a first for me. I like the idea of making a children’s film or maybe something really crazy and frightening. I’m not sure yet.