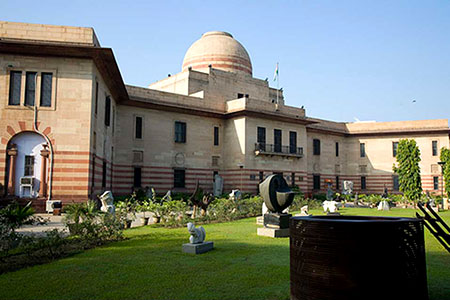 There’s no queue at the ticket counter, there’s no one crowding the exhibits and there’s certainly not the buzz that museums so often have. I can take my own time at each painting, stand up close without bustling for elbow space and stay there for a couple of minutes. The next visitor is almost six paintings away, and I don’t see a third for another two rows.

I start in the basement of the New Wing where the Company paintings are. The miniatures from the Rajput period are inundated with detail, I notice the alta on the women’s feet and a tear where a finger should have been. Historical preservation and retrieval make complete sense in a place like this. Where the paintings are frayed at the ages, the paper is palpably aged with time and the handful of photographs in the section is sepia toned and grainy with time.

The building that on March 29, 1954, became the National Gallery of Modern Art had previously been the Jaipur House, one of the carefully conceptualised buildings of Lutyen’s Delhi. The architect, along with Herbert Baker, had envisioned a Central Hexagon of buildings that would girdle India Gate. The fact that the National Gallery was installed there is an indication of the hopes that were harboured for its future. A handful of people like Jawaharlal Nehru, Maulana Azad, Humayun Kabir, and an active art community carefully pieced together an idea for a place that would come to be the center if not the hub of India’s art life. Just take a walk, one painting at a time.

Walking down a row, up a ramp, and up a floor, if you peer closely enough you can trace the evolution of men, thought, and materials as seen through art. Thousands of journeys come together as it becomes tangible how far we’ve come in the way we hold a paint brush; in the way we document human history.

The museum aimed to procure and preserve artworks from 1857 onwards, and has so far collected approximately 17, 000 pieces. They have retrieved works from pre-independence and slowly amassed the work of newer artists. Collections made of smaller collections, historical and aesthetic, make up the museum. One of the plaques accompanying the paintings in the Company Period states, “The social division of India into various castes captivated the British who desired to procure picturesque images of Indians from every sphere of life. Pictures ranging from representation of high ranking nobles to common coachmen were produced at various centers of the Company School”. A gigantic patchwork quilt, some a little torn, some with glaring gaps, history runs a straight if shallow line.

The first floor continues in the vein of the previous level, there are more Rajput miniatures. There are large canvasses, renditions of Indian landscape and architecture by Thomas Daniell just around the corner. Benaras is immediately recognisable; enough of the city has endured and enough of the old city has been captured to make the connection. Similarly Marshall Claxtion captures Colonial Calcutta where the Englishmen raise their hats at passing ladies while the Indian ayahs fuss over the English children at a respectable distance. The art becomes less exotic and more earthly and person-oriented as one moves across the floor. I encounter notably Raja Ravi Verma’s realism and Kshitindranath Majumdar’s ghostly, otherworldly feel.

The realism, the clutching to details has given way to other perspectives. The breach into modernism has begun. There is distortion, blurring, magnification, mockery, subversion. The attempt at imitative perfection, the effort to squeeze details into a few square inches has disappeared. Enter the world of Jamini Roy where the lines and tiles chastise the jagged ends of human existence into making sense. Amrita Shergill removes herself from an Indian reality or any kind of geographic hold, and the painting appears illusorily to exist in a vacuum. On the top floor, we’ve reached almost pure abstraction.

Another way of reading history, another less cacophonic medium of studying the advent of science and coming to terms with the staggering knowledge of our evolution. It’s easier to understand time when so much of it seems to stagnate, churn, curdle, and recycle in front of you.

It’s true that the exhibitions are few and far between and that not many people visit the museum, but it’s the same as any record, any other scrap of historical evidence that’s saved carefully for whoever and whenever it’s needed. And when the time is right—and at the risk of invoking a cliché, I think that the time is now when so much of it stands in front of us—I’d suggest taking a walk. You don’t have to return, you don’t even have to linger. Just take a walk, one painting at a time.

Staccato on the Streets