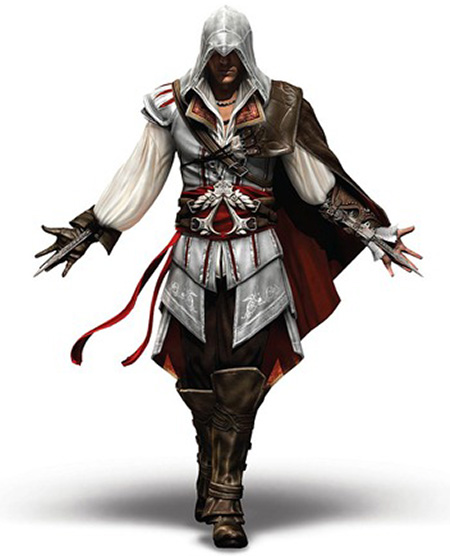 Excitement was running high when part one came out. The cutscenes promised the world, and I remember suffering a mini-orgasm when we discussed how cool it looked. The menacing walk, the retractable blade with the finger cut off, the hood, and the magnificient parkour. Maybe, just maybe, we’d get to play the Age of Empires for action/adventure games—the one game that would change the rules. Assassin’s Creed, released in November 2007 was not that game.

It was too slow. There were too many random levels. There was too much talking and the swordplay was repetitive—not to mention, the story seemed like someone’s idea of an elaborate and torturous practical joke, one that didn’t seem to be going anywhere. I felt let down, despite the walking and the jumping around. Something about it was just not right, and my heart started to sink a few nanometers every day that I played the game.

Until I got my hands on Part Deux.

Assassin’s Creed II is almost the perfect sequel. It irons out all the flaws of the first one—keeping all the good parts intact—and adds on some much needed badassery.

If Altaïr was the man, they clearly forgot to mention it in part one, because in Assassin’s Creed II, you get to play Ezio Auditore da Firenze, an Italian nobleman in the Middle Ages, with a very special historic friend who guides you through the game. Continuing with the same Animus machine, you get the chance to jump around all over Italy in the 1400s, changing the course of history and bedding a couple of Italian noblewomen on the way.

The plot of Assassin’s Creed pulls together a bit of The Matrix, a lot of historical fiction, and throws in elements of the madcap conspiracy theories found in a Dan Brown novel. The series also has the benefit of being crafted by some of the most talented hands in game development. With only a handful of exceptions, the environments, animations, and art are quite stunning. In addition to its good looks, the sequel’s gameplay builds tremendously upon the foundations of the first game, making the 2007 version look like little more than a technical demonstration.

It’s pretty pointless going into the details of the game—you should buy the game and play it for yourself. It’s very Robert Langdon—only you’re not 40, balding, and boring. You get to swim, row a boat, fly, and learn a few much needed game tricks. Assassin’s Creed II is one of the few games that add a lot of depth to the character that you play—it’s like playing a real person, quite unlike the mini-game sequences mashed together in the first installment of the game. The story is a lot more fun and detailed, and with an improved interface, it is a lot easier to go into previous memories. The game has some crazy Easter Eggs too—you must check out the glyphs.

The Assassin’s Creed series continues with the major religious subtext with the Creed going up in arms against the Templars and keeping free will alive by way of murder, which is a little oxymoronic, but since the continuity of the grand design rests on their shoulders, we let it slide. “Nothing is true, everything is permitted” becomes the frame of reference as Ezio continues Altaïr’s work of removing whoever stands in the Creed’s way.

With Assassin’s Creed: Brotherhood about to hit Indian shores, I’m bracing myself for the mass killing frenzy that’s about to ensue. If you have ever felt angry at the system, the Assassin’s Creed series of games is most definitely worth your time. After all, how many games give you the chance to kill everyone from the local regent to the Pope?

The Cleanest Village in Asia