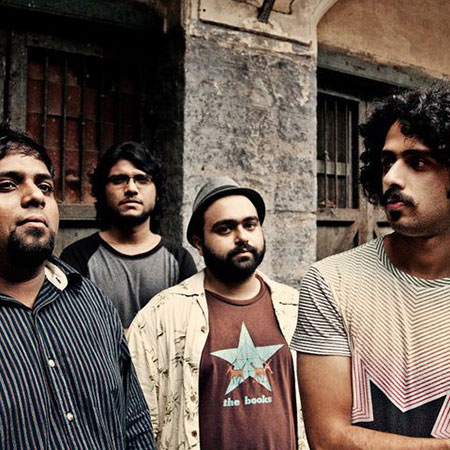 The Virtue of Visibility

Headed by singer and songwriter Vitek Goyel, Slow Down Clown is a four-piece alternative rock outfit from Bombay whose first music video ‘Stupid Sea’ recently went live on YouTube. Resplendent with Bombay street art, the video marked a decided milestone for the band, and was soon followed by their debut full-length album, Forget the Night.

In an exclusive interview, Vitek shared with us the journey of the band so far and spoke about the evolution of their music. Read on for excerpts— Slow Down Clown has gone from being a solo project to being a four-piece band that dabbles in several genres. How would you say the sound of the band has evolved along the way?
Slow Down Clown is constantly evolving. When I started Slow Down Clown back in 2001, it was initially a two-piece band with a friend of mine. We used to do a lot of collaborative tracks that tended to be more experimental, as opposed to sticking to conventional songwriting methods. After a while, it became more of an acoustic solo project, and I started to write more songs in a folk-oriented style, with a bit more structure to them. I never really intended for those songs to leave the space of my bedroom where I recorded them, but I slowly started sharing songs with friends and started putting them up online. Soon after, I wanted to try and see how these songs would sound backed with a real band, and I was encouraged by Anurag Shanker to record an E.P. with some musicians he knew. The result was the Say Nothing E.P., which while being recorded with a band, was still more or less a solo project effort. But as we started playing more together, we realised we liked being in a band together.
At that point, we kept playing around with the songs at live gigs until we found the right mix. Each musician in the band brings his own flavour and influence, and I think it really makes for a unique sound that I could never have accomplished on my own. A track like ‘Shoreline’ really highlights the current sound of the band, and if you listen to an early solo version of the song you will realise instantly how completely different it sounds with the full band.

Tell us a little about how the band was formed.
I formed Slow Down Clown with a friend of mine, Nick Sullivan, when I was studying in upstate New York in 2001. We were both really into acoustic/indie/alternative/folk and all sorts of weird experimental music, and we started it off writing very unconventional songs. Very synth-heavy with lots of heavily-reverbed, out-of-tune guitars and freeform lyrics. It was a lot of fun. When I came back to India, I continued writing but since I was writing on my own, I started doing more folky songs. I started listening to a lot of artists like Daniel Johnston, Mark Kozelek, Jeff Tweedy and really dug their style, and started writing in a similar vein. I wrote probably a few dozen songs in the span of 2007-2008 that formed the basis of many later Slow Down Clown songs. I met Anurag Shanker around that time, and through him I met the other guys, Kenny and Arfaaz. They liked the music and came aboard for the ride, and it’s been wild ever since.

“I think that our music is all about evoking an emotional response and feelings of nostalgia.”

What are your primary musical influences?
As a band we’re all big fans of ’90s alternative rock, but we each have our own unique tastes as well. I know Arfaaz likes a lot of electronic music and Anurag is big on jam bands. For me, besides listening to bands like Nirvana, Red House Painters, Radiohead, and Modest Mouse, there are also folk influences such as Bob Dylan and Leonard Cohen. But I am also a huge fan of jazz, Indian and Western classical and avant-garde music.

Your debut music video for ‘Stupid Sea’ was recently released on YouTube. How was the experience? How has the response to it been so far?
It was a really fun experience just being a part of the whole video thing. I don’t think any of us have ever made a video before, so this one was definitely special. It was a lot of fun during the video shoot because we were all hanging out and goofing off. I do remember that day was extremely hot, so we had to keep looking for some shade to cool off between takes. The response to the video has been great—a lot of people really liked it. It was up on Vh1 for a few weeks initially and it was nice to have friends and family and occasionally strangers say, “Hey, I saw your band on T.V.!”

The video has a Bollywood/retro feel to it, with a backdrop of Bombay street art. Was the band involved with the conceptualisation of the video? How did the idea of the lonely clown in the video come about?
It was Aman Mahajan who conceptualised, directed, and edited the video. Aman is a good friend of Arfaaz’s and he really liked ‘Stupid Sea’ and was extremely interested in making a video for it. I think he was totally inspired by the theme of the song, and had some great visual ideas that he wanted to try out and felt the song would be a good fit. Aman works as a filmmaker and assists a well-known Bollywood director, so may be that’s why the video has that retro Bollywood feel to it. The lonely clown, of course, was Aman’s idea as well.

How do you go about coming up with new material? What subjects do you personally enjoy writing about?
It’s hard to describe, but sometimes the music just comes to you. I don’t think there’s a process to it; it’s all about the right ‘feeling’. Sometimes i’ll pick up my guitar and nothing will happen, and sometimes I’ll write a song almost instantly. I don’t like to edit the material too much, so I try to stick the song’s origins as much as I can. Now, however, since we’re writing more as a band, we have a different approach and are starting to write more songs collectively. There aren’t any ‘topical’ songs or songs that necessarily have a certain meaning. Most of our songs are more about evoking an emotional response and feelings of nostalgia. I think that’s what Slow Down Clown’s music is all about.

Would you say your music is a means of storytelling? What are the themes that you relate to the most?
I am a big lyrics person, and I’ve been writing for as long as I can remember. I think I’m probably more of a writer than a musician. I love to tell stories that can be extremely personal, yet universal, at the same time. For me, writing songs is a way of self-healing and reaching out. There was a period when I was going through a lot of personal turmoil, and writing songs was my way of dealing with everything that was going on in my life. I try to express myself sincerely by writing about my experiences and it’s great when total strangers can relate to it. Even though some of the songs cover heavy themes like loss, sadness, anger; there is also an underpinning of hope and memory that runs deep in the material. During the making of the ‘Stupid Sea’ music video.

According to you, is there any particular theme that runs through your debut album Forget the Night?
I think the best part about the album is that it is open to interpretation and we wanted it to be that way. Forget the Night means different things to each of us, but overall I think it’s about forgetting the past and moving on with life. It’s about new beginnings and new directions. I think the new sound of Slow Down Clown also reflects that.

Were there any hiccups during the making of the album?
There are always hiccups. How can anything awesome happen without them? When there are four creative minds working on a common goal there are bound to be differences of opinion. We had our share of issues during the recording and production of Forget the Night, but it brought us closer as individuals and reinforced our faith in the theme of the album. Hiccups only make you stronger. That’s what Forget the Night is about.

There are rumours of an upcoming album tour. Are those true? What else does Slow Down Clown have planned for the near future?
Yes! We never got the chance to tour in support of the album as soon as it came out, because we were all kind of tied up with our personal lives (I recently got married). But we have finally begun planning out an album launch tour in January/February 2013. Since the beginning, Slow Down Clown hasn’t had many opportunities to perform in cities other than Mumbai and occasionally Bangalore and so this time we’re really looking forward to a full fledged tour to Delhi, Calcutta, the northeast, Bangalore, and Chennai. People in these places haven’t really heard of Slow Down Clown and we would like to change that because our music really is for everybody. We’ve put a lot of effort into this album and our primary focus now is to push it out there amidst all the clutter and get people aware. Apart from this, we’re going to be working on new material and rehashing the old. As always.

Download Forget the Night for free at this location.